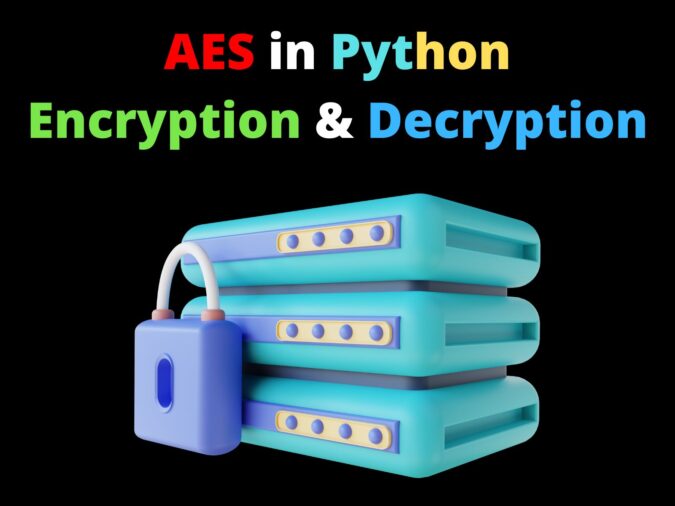 Today, we will implement AES in Python for encryption and decryption in Python. Python has a Crypto Cipher package for securing the data i.e. PyCryptoDome, an almost drop-in replacement for the old PyCrypto library. It contains both symmetric and asymmetric key ciphers as well as some hybrid encryption algorithms. Use the command below to install pycryptodome-

We start by selecting our encryption algorithm. The new() function is called to create an instance of the cipher. It takes the key as a parameter along with additional parameters like nonce and mode of operation. The encrypt() function is used to perform the encryption and decrypt() for performing decryption.

We implemented the AES algorithm in python in just a few lines of code. AES is much faster and safer than its predecessor DES algorithm and it is also implemented in hardware for faster processing.

Now, let’s understand, What are Encryption, Decryption, and AES in computer science?

Encryption is a technique of converting plain text data into cipher text. It is used for secure communications. Only the person with the decryption key is able to decrypt the cipher and view the actual contents of the data.

There are 2 types of encryption depending upon the nature of the key:

There are 2 types of encryption based on the way the text is encrypted:

AES is a symmetric key block cipher established by the US government in 2001. It supercedes the DES algorithm and is about 6 times faster than DES. DES had a small key size, this made it prone to brute-force attacks as the advancement in technology has made processor speeds very high. It takes in 128-bit plain text and a key of 128, 192, or 256 bits and outputs cipher text of 128 bits. It utilizes a substitution permutation network (SP). SP involves a series of linked operations including replacing certain bits (substitution) and interchanging bits’ positions or shuffling them (permutation).

AES is widely adopted around the world as the security standard. No cryptanalytic attacks against AES have been found. It is one of the safest and fastest encryption algorithms.

AES uses a key schedule process to generate n +1 128-bit keys from the given key, where n is the number of rounds.

AES consists of 10, 12, or 14 rounds of encryption depending on key sizes as 128, 192, and 256 bits respectively. AES works using bytes instead of bits so a standard AES encryption takes 16 bytes or 128 bits of data as input. Each round of AES consists of four steps.

The decryption process is the same as the encryption process but in reverse order. Here, first, we perform AddRoundKey, then MixColumns, then ShiftRows, and finally SubBytes.

If you have any questions/doubts in mind, please use the comments below.

We hope this article on AES in Python will help you.