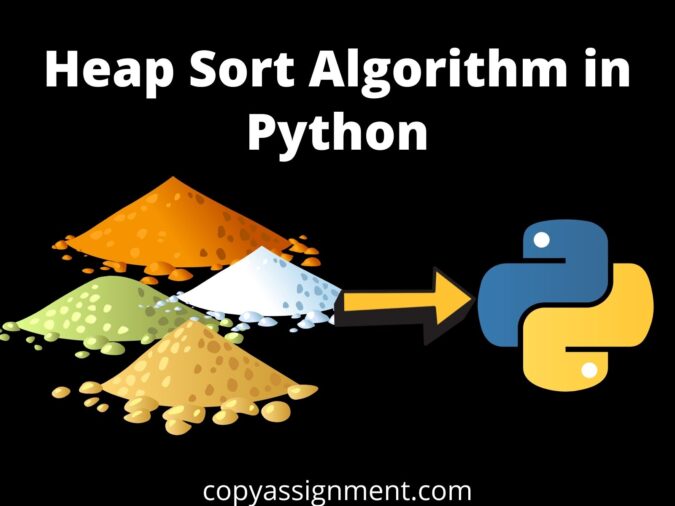 In Part-1 of the heap sort algorithm, we have discussed how we can represent a tree in array format, what is a heap, types of the heap (max-heap & min-heap), and then how to insert an element in max-heap. Now, In this section, we will see the Heap Sort Algorithm in Python and how it works with an example, then we will discuss the time complexity and space complexity. Afterward, In the end, we will compare heap sort with merge sort and quick sort. If you have not studied Part-1 topics it will be difficult for you to understand the heap sort. That’s why it is not suggested to skip those topics.

Working of Heap Sort with example

In Heap Sort, the given input array is first converted to a Complete Binary Tree. Then, a Heapify() function is called that changes the Complete Binary Tree to a Max Heap. It is being done so that the largest element from the array can be obtained easily.

The element being removed is inserted in a Queue. Since we know that in Heap Sort, we also require a Queue data structure. The use of this queue is to hold the removed elements pop then back in the form of a sorted array.

After deletion, the resultant elements will again undergo Heapify() function and all the above mentioned steps will be performed again.

Let us understand with an example

Now what we will do, we will swap the root node (96) with the last node that is 34 and after swapping we will remove the element 96.

Now as you can see it’s not a max-heap as it is violating the condition so again we will perform the Heapify() function to change this to a max-heap. And then follow the same procedure as we did earlier. We will swap the root node with the last node then after swapping we will remove that last and check if it’s a max heap or not.

From the Queue, shown above, elements will pop one-by-one, giving us the sorted sequence of array elements (in ascending order), which is the desired output.

This is how, Heap Sort works.

As we have discussed in the previous section, the heap sort algorithm uses two different functions. First is the Heapify() function. Initially, we have used Heapify() to build a max-heap out of the complete binary tree. After that, we have used it after every delete operation, so that we can get the largest element. Now, the time Complexity for Heapify() function is O(log n) because, in this function, the number of swappings done is equal to the height of the tree.

For an algorithm, space complexity is defined as the memory space occupied by it to run and execute all its operations. For Heap Sort Algorithm, Space Complexity is O(1) because it involves constant swapping of elements for which the space required is equivalent to only one element.

Is heap sort an in-place algorithm?

Yes, Heap Sort is an in-place sorting algorithm because it does not require any other array or data structure to perform its operations. We do all the swapping and deletion operations within one single heap data structure.

How commonly we use heap sort?

We don’t use heap sort so often. As the programming of heap sort is a little bit complex so we don’t prefer it. In case, we have a choice we generally prefer Merge Sort and Quicksort. But remember if we already have a heap data structure in our program then we will go for heap sort.

Quicksort, Merge sort and Heap sort perform very differently when we take different and large data sets because if we take small data sets then the execution will be very fast and no marginal difference will be observed. If the data sets are large in size, then it will affect the memory space and size and we will be able to easily differentiate which one is better among the three.

Quicksort and Merge sort both work on a recursive algorithm or you can say they use recursion, on the other hand, there is no such recursive algorithm in Heap sort. In Quicksort, since we select a pivot element randomly, thus, it sometimes serves as the fastest sorting algorithm if we choose a favorable data set. Whereas in the case of linked lists, the merge sort serves the best.

Check this video for more:

If you found this article useful please support us by commenting “nice article” and don’t forget to share it with your friends and enemies! If you have any query feel free to ask in the comment section.

You may also read