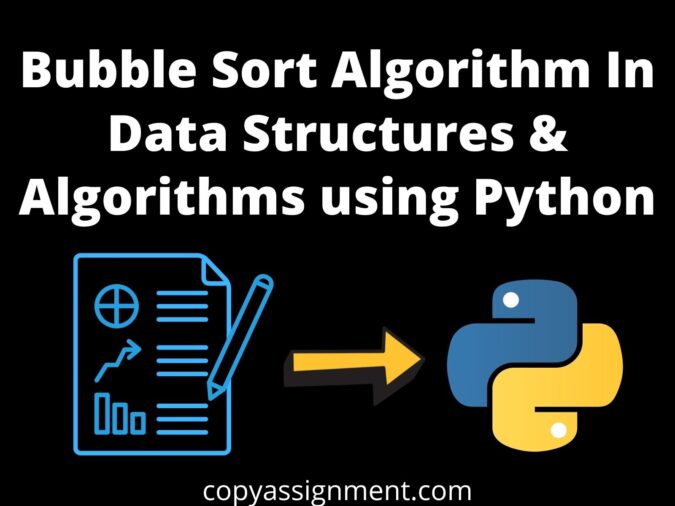 Bubble Sort is one of the simplest and easiest sorting algorithms in Data Structures. It is a comparison and swapping based sorting algorithm which is used to arrange the elements of an array (in ascending order).

In this article, we are going to see how we can implement a Bubble Sort Algorithm in Data Structures and Algorithms using the Python programming language. First, we will see the working, then we will move on to the algorithm after that we will see the actual code in Python and C++ language.

How does the Bubble Sort Algorithm work?

In every iteration, the same process is repeated until the array gets completely sorted (in ascending order) and all the elements get placed at their correct position.

Step2: If the current element is greater than the next element swaps them.

Time Complexity – In an algorithm, the time complexity is defined as the amount of time taken by it to completely run and execute all its operations.

Bubble Sort algorithm has a time complexity of O(n2) for all three cases as explained below.

Space Complexity – For an algorithm, space complexity is defined as the memory space occupied by it to run and execute all its operations.

In the Bubble Sort Algorithm, all the elements are swapped within the space of a single array, given initially and does not require any extra memory space or array or any other data structure for its execution except one variable temp, which is used to store the element being swapped at a temporary location. Thus, it has a space complexity of O(1).

Yes, it is an in-place sorting algorithm because it does not require any other array or data structure to perform its operations. All the swapping operations are done within the space of a single input array given initially.

Yes, it is a stable sorting algorithm because if the given list contains two elements of the same value then the element occurring at first in the input array will also occur first in the output array.

Let us understand this with an example –

Note : Subscripts are added only for the purpose of understanding.

Yes, It is an adaptive sorting algorithm because if some of the elements of the array are sorted itself or we can say if the array is almost sorted, then it will take into account the ‘already sorted’ elements and the overall estimations will come down to O(n).

There is a better version of bubble sort, known as modified bubble sort which includes a flag in the inner loop. We initialize that flag with false. If a swap is made after an entire iteration of the outer loop then we set the flag to true otherwise keep it as it is. If the flag remains false then it should be clear that the array is already sorted because no two elements are swapped. In that case, there is no need for sorting and the sort should end. The new best-case order for this algorithm is O(n). Let’s see the code for the modified version in python. It only requires a few changes to the previous code.

If you found this article useful please support us by commenting “nice article” and don’t forget to share it with your friends!