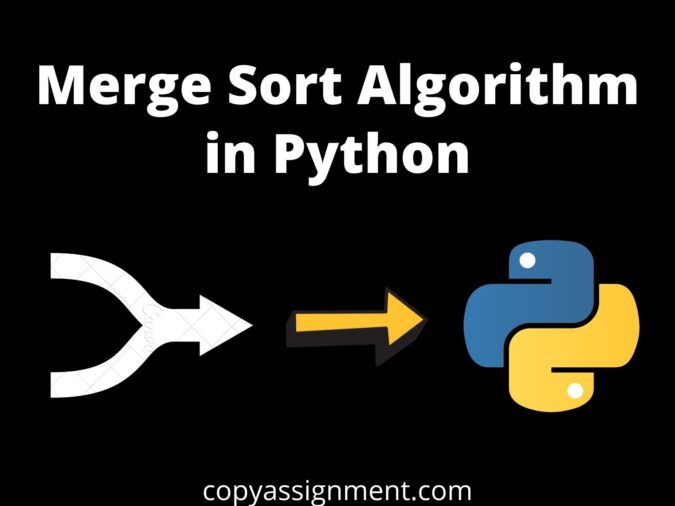 Sorting and Searching algorithms like insertion sort, selection sort, merge sort is essential to learn as a programmer because these form the base of any programmer. As a programmer, you have to deal with large amounts of data from time to time. This data needs to be sorted in a logical manner. A sorting algorithm is used to rearrange a given list or an array of elements in a defined order, either increasing or decreasing. In this section, we’re going to cover the implementation of the Merge Sort Algorithm with examples in Data Structures and Algorithm category using Python. Merge sort algorithm is a sorting algorithm that is used to sort a list or an array in ascending or descending order based on the user preference. It is completely based on the concept of “divide and conquer”. It first divides the array into equal halves and then merges them back again in a sorted manner.

For example, if we have the input list/array like this :

Then after implementing this algorithm the output will be like this:

This algorithm is one of the most efficient techniques to sort an array and it is implemented using the divide and conquer approach.

Let’s understand this with the help of an example to make it crystal clear.

We know the algorithm first divide the array into two halves:

The divided halves are further divided into halves, keeping the sequence as it is. No sorting takes place at this point:

The further division takes place until we are left with single elements:

From single elements now we have lists that contain two elements. We further merge this list by comparing elements of both lists one by one and inserting them into a new list that is sorted.

The above same process is repeated until we are left with only one list containing all the elements of the initial list we began with. This is the final sorted list that we want.

Merge sort work on the principle that keeps on dividing the list into halves until no further division can take place. In the end, a list will contain only one element, and if the list contains only one element then it is sorted by default. Then merge sort combine these smaller sorted lists into a single sorted list. The algorithm goes as follows:

Step 1: if there is only one element left in the array, then it is already sorted, return.

Step 2: Divide the array recursively into halves until there can be no more divisions possible.

Step 3: Merge the smaller arrays into one array keeping it sorted in order.

For the application of Merge Sort algorithm n auxiliary space is required as the elements of a given array are copied into new arrays, each containing a single element only. Hence space complexity is O(n).

If you found this article useful please support us by commenting “nice article” and don’t forget to share it with your friends.