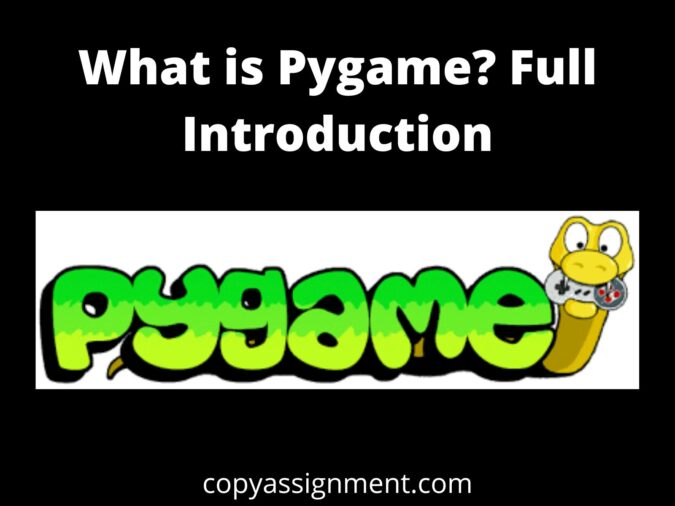 Gaming has been fun for all of us since childhood. We all enjoy playing games. But almost all the games that we have played yet were made by someone else. But you know what would be really cool? Creating your own game. Don’t worry if you don’t know how to make one. We are here to help you. In our series of articles. We will learn how to make a game in Python Programming language and it’s one of the most famous libraries, “Pygame”.

But, what exactly is Pygame?

Pygame is a set Python Module that is designed for writing Video Games. It is a free and open-source library. And one of the most popular python libraries to create games and applications.

It adds functionality on top of an excellent SDL Library, SDL stands for Simple DirectMedia Layer, that allows the programmers to add multimedia and create fully featured games.

It was written by Pete Shinners and was first launched on 28th October 2000.

And one of the main reasons that we will be using this library is that it is extremely simple and efficient. It is highly portable, which means it works on almost all operating systems.

Does not require a GUI to use all functions. SDL provides cross-platform support to your system’s underlying multimedia hardware components, such as sound, video, mouse, keyboard, and joystick.

It supports Linux (pygame comes with most mainstream Linux distributions), Windows (95, 98, ME, 2000, XP, Vista, 64-bit Windows, etc), Windows CE, BeOS, MacOS, Mac OS X, FreeBSD, NetBSD, OpenBSD, BSD/OS, Solaris, IRIX, and QNX. The code contains support for AmigaOS, Dreamcast, Atari, AIX, OSF/Tru64, RISC OS, SymbianOS, and OS/2, but these are not officially supported. You can use it on handheld devices, game consoles, and the One Laptop Per Child (OLPC) computer.

It requires a small amount of code. As pygame already comes with hundreds of pre-built commands, it becomes easy for programmers to create complex games also. Now you don’t need to write thousands of lines of code to make games.

And it is modular, which means, you can use pieces of pygame separately. Want to use a different sound or image library? That’s fine. With Pygame, many modules can be initialized and used separately.

You have full control over your main loop. That means, you can call pygame functions, but they don’t call your functions. This gives you greater control when using other python libraries.

Pygame can also use multi-core CPUs that help the creator to bring more functionality to their games. Selected pygame functions release the dreaded python GIL, which is something you can do from C code.

You can make 2-Dimensional games using Pygame. This is true that people love 3-Dimensional games with realistic graphics, but it totally depends upon the creator, that what type of game he/she is making. Games like “Among us” are actually popular among us. So, it completely depends upon the programmer how addictive and interesting game he/she is making is.

The relationship between Pygame and Python… like Thor and Thunder

Before starting pygame you need to have a basic understanding of python programming language, such as how to use loops, lists, etc. But it is a great module that can be used to easily create fantastic games for free.

If you create a very good game then maybe you can even release it commercially. Right now, there are not many games available in the market that are made using this library.

Pygame was made using C and Assembly language so it is quite fast.

We will be using Python to add logic and functionality to our game because Pygame cannot do that alone. Without python, your game would be like paused football match.

Improving every day by Pygame Community

You can also contribute to this community by sending them Bugs, patches, etc. The Pygame community provides a fast response to reported bugs. You can do a search on their mailing list for BUG.

So, are you excited to make your first game? Hold on to your talent and endurance. Let’s do it!

Thank you for reading, if you found something wrong, please let us know. Feel free to ask anything.