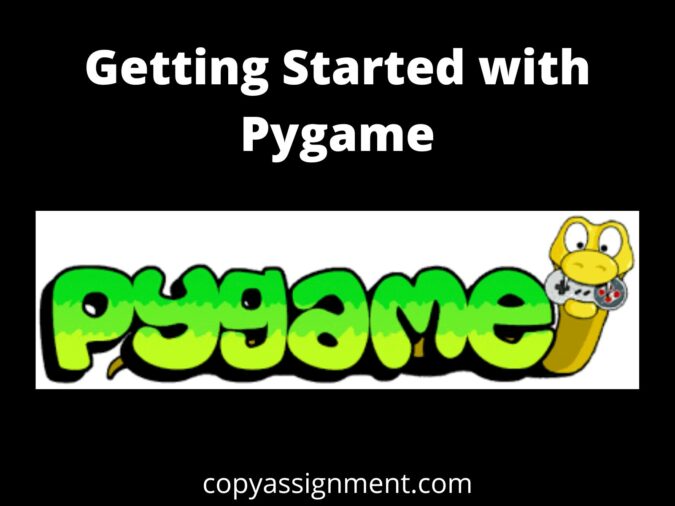 To get started with Pygame, you need to install Pygame library in your system.

Pygame requires Python, so make sure that you have Python 3.7.7 or greater, because it is much friendlier to beginners and it also runs faster than the previous versions.

The best way to install Pygame in your computer is by using the pip tool. Python uses pip to install packages. Pip is installed automatically while installing Python.

Write the following code in your terminal:

We are using “- -user” flag to tell pip to install pygame in the home directory rather than installing it globally.

To see if it works, run the following command:

If something like this appears, you are ready to code. Now you can directly go to tutorials.

If the above method did not worked, then you can try some alternative methods below.

Wheels are available for x86 and x64 architectures on Linux and Windows, and for x64 on Mac. If pip doesn’t find a wheel for your platform, it will try to compile pygame from source (see below).

Make sure you have installed python 3.6 or greater with the “Add python to PATH” option selected. This means that python and pip will work for you from the command line.

If you have the above information satisfied then run the code given below on your command prompt.

If it works then you can now move to tutorials.

If this error occurs then, try opening your command prompt with Administrator privileges by right-clicking on the Command Prompt icon and click on ‘Run as Administrator’.

Note: This does not seem to work for Python 3.9, so use Python 3.7. Comment if any other error occurs.

If the above method did not work for you, then maybe you are using recent version of Mac OS X. Try running this code in your terminal:

If there are problem with ‘ then maybe that’s because of virtualenv.

More details here: details on the virtualenv issue. It does work if you create a venv with python -m venv however.

Instructions if you want to use an virtualenv (some people have trouble with the window losing focus when inside a venv).

That’s just needed on Mac if you use virtualenv.

If any error occurs, please read the MacCompile Instructions.

Many Linux and BSD distributions have their own packages of Pygame. These may have an older version of Pygame than the wheels, but have been carefully tested with other packages in that distribution.

Installing from the Source:

Compiling and installing pygame is handled by Python’s distutils. Pygame also comes with some scripts to automatically configure the flags needed to build pygame. Use the “setup.py” script to start the installation.

The first time you run the setup script, it will call the “config.py” script. This will build a “Setup” file which stores all the information needed to compile. The “config.py” will do a good job of detecting what dependencies are available and where they are located. If it isn’t perfect, it is easy to build your own, or edit the created “Setup” text file. This “Setup” file is a simple Makefile-like text file. It defines variables needed to use each dependency, and then enables all the pygame modules with found dependencies. If you have trouble compiling, you should be able to easily fix any problems inside the “Setup” file.

Running the “setup.py” script will call distutils to build and install the pygame package. Distutils actually supports a wide variety of compile and install options. running “python setup.py help” will start to show you the different options available. You can change many things like install locations, compiler to use, and more. Calling the “setup.py” script with no arguments and it will just ask you if you want the default flags needed to compile and install.

Some of the .c files are generated by Cython from .pyx files. Running “setup.py cython” will update them.

You can compile pygame on windows with mingw (gcc for windows) and also with visual studio. Up to date details can be found here: CompileWindows

Compiling from linux shouldn’t give you any problems. One thing you must keep in mind is that most linux RPM packages separate the actual library from the “dev” files needed to compile. To build you will need to make sure the packages like “SDL-dev” are installed.You can check to see if SDL is ready to be built from by running the command sdl-config and seeing if it is found. If the sdl-config script is not on the path (or you have more than one?) Set the environment variable SDL_CONFIG to its location.

Instructions for compiling on Mac OS X can be found here: MacCompile

if you have anaconda installed in your system, then please deactivate base by running the following command:

then run the following command: