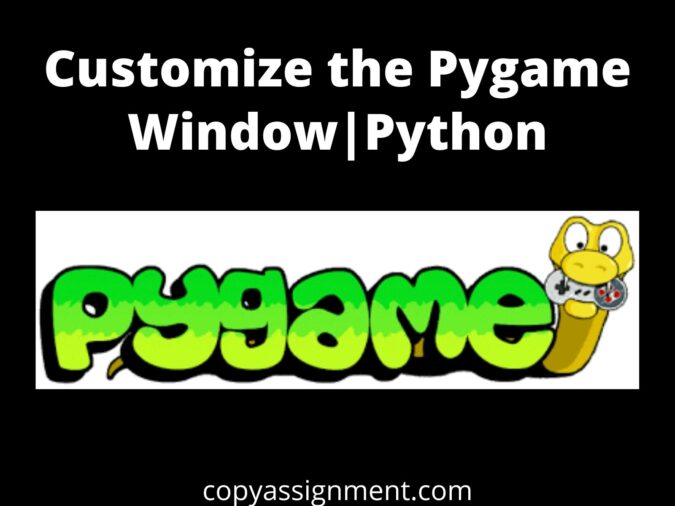 In the previous article, we learned how to create a game window using pygame and python. But it was definitely not what we all wanted. Of course, we need to Customize the Pygame Window by adding a background color, change the title, and adding an icon. So in this article, we will learn how to apply these things.

Changing the title of the window using pygame:

As we previously saw that by default the title of our game window/screen was “pygame window”.

set_caption sets the current window caption/title. It takes two arguments that are title and icon title. For this course, we don’t need to worry about icon titles so we won’t be using them. We will be passing only one argument that is the title as a string.

The code to change the title of the window is given below:

Notice the title change. From “pygame window” it is now set to “Copy Assignment”.

By default we get a black background colour with our game window. So, to change it we will be using our screen variable where we stored our window.

The function that we are gonna use is fill(). It fills screen with a solid colour.

fill() takes 3 arguments that are:

The colour argument can be either a RGB sequence, a RGBA sequence or a mapped colour index. If using RGBA, the Alpha (A part of RGBA) is ignored unless the surface uses per-pixel alpha (Surface has the SRCALPHA flag).

Here is an example:

So we can make different colour combinations just by changing the values of RGB colour code.

Now lets change the colour of our window by writing the following code.

Now, if you run it, you will not be able to see any changes because we haven’t updated the changes in our display window. So to do that we need to use a function from the display module that updates the display.

So we will be updating our display every time the while-loop executes.

To update the display, we need to write the following code:

You output window must have been looking like this:

To customize the icon of the window, we first need to load an icon image into a variable, and in order to do that, we will use the image module of pygame. And the function that we are gonna use from the image module is load(). It takes one argument where we need to put the path of the image as a string.

The syntax of the command that we are gonna use is:

Now, as we load the image inside the variable, now it’s time to set it as the icon of the window.

To do so, we need to use a function from the display module of pygame, that is set_icon(). It takes one argument, that is the image that we want to put as the icon. So, to set the icon, we need to write the following command.

Now try to run it. Notice the change in icon of the pygame window.

So, in this article, we learned how to Customize the Pygame Window. If you have any queries, do send them through comments. For further details about customizing the display of the pygame window, check out the documentation: Pygame Display Docs.