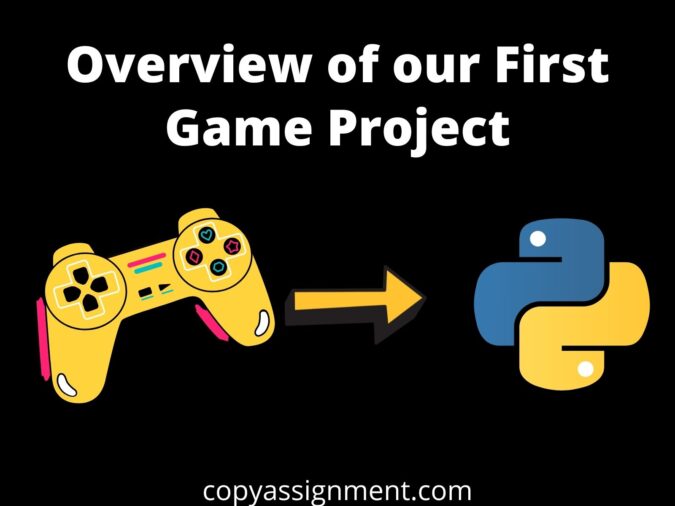 So, congratulations, after learning all the basic and essential concepts of our pygame series, you are finally here to get the Overview of our First Game Project

Overview of our First Game Project

And at the top left corner of the window, we see a score board, that is a text.

And at the bottom, there is an image of a man, who is still in his position. And there is also an image of a woman… The concept of this game is to protect the Guy, who is the CEO of that Gold Digger Girl. And to do that, there is a block that protects the guy…

Now, let’s talk about the mechanics of the game.

By this movement, we can clearly see that by colliding with the wall there is no change in her movement in the Y direction. So, to change the direction of the girl, we need the change the movement in opposite direction and we do that by simply changing the value of X to negative.

If X increases by 1, then our equation must be looking like X+=1, and to convert it to negative we will simply just multiply it by -1.

The rule is exactly the same what we studied in middle school.

And now, let’s talk about what happens when the girl touches the protecting block.

When the girl touches the block or the upper wall, and as soon as she does that, her movement is changed in the exact opposite direction, that is in the Y direction. And to do that, we will do the same that we did to change the X value, i.e. to multiply it by -1. And it will change the direction of the movement of the girl.

So, this was all about the movement of the girl, now let’s talk about how we will detect that the girl has touched the block.

It’s simple and easy. Let’s say, I have an image of a block the extends to the left-right boundaries. If my image was 100px, then we know that the size of the block horizontally is equal to 100px. If we take one side of the block as the starting point, then we know that the other end is exactly 100px. And in pygame, the coordinate of an image is calculated from its top left corner, and if we observe it, we see that the distance from the top left corner to the top right corner is the distance that we are talking about.

For the Scoreboard, we increase the score by one every time the block collides with the girl. And we know how to detect that collision so that’s also now easy enough to do.

For the sound effect, there is a laser sound that plays every time the block collides with the girl. And again… you know how to make that work.

If you are new here then we recommend you to, see our previous articles.

So that is it for this article, we will now see you on our next article where we will build our first complete game. Until then enjoy learning.