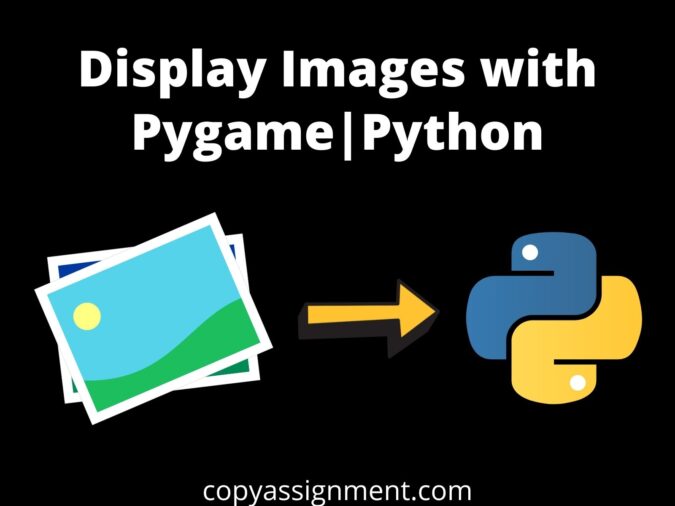 Now comes the most exciting part. In this article, we will be Display Images with Pygame. So, one of the most important things that you need to move further in this tutorial is of-course images.

Flaticon offers a wide catalog of free icons. When you perform a search, there will be a few options shown on the top left corner of the screen, where you can filter by “Free”, for content free of charge, or by “Premium”, for icons available only to Premium users.

Freepik offers a wide catalog of free resources, which you can find by filtering by “Free”, from the “Filters” option on the site, on the top right corner of the screen. This content is completely free of charge.

Now, to Display Images with Pygame, we will be importing our image to our python program by using pygame. And it is very simple just like we did earlier by using the image module of pygame. The function that we are gonna use is load().

load() takes 2 arguments if you are passing a file object else you need to enter only one argument that is the filename.

Load an image from a file source. You can pass either a filename or a Python file-like object.

While we want to Display Images with Pygame, Pygame will automatically determine the image type (e.g., GIF or bitmap) and create a new Surface object from the data. In some cases, it will need to know the file extension (e.g., GIF images should end in “.gif”). If you pass a raw file-like object, you may also want to pass the original filename as the namehint argument.

To load the image we will use the following code:

After adding this, your code should be looking like this:

Now, after we have loaded the image inside our background variable. We need to place it on our game window. To do so, we need to use a function called blit(). It is the function of our window/screen. It is used to draw one surface on to another.

blit() takes 4 arguments that are the following:

An optional area rectangle and a special flag can be passed as well. This represents a smaller portion of the source Surface to draw.

So, now we will write code inside our game loop (while loop). We need to put it in the beginning of the loop as it is our background image, nothing should come before it.

The code that we need to write is:

After writing this your code must be looking like this:

Now we will be adding images and graphics and it is the same way we added our background image. But we need to specify the coordinate of our images.

As pygame is specifically used to create Two Dimensional Games it has only two coordinates that are X and Y.

Now if I want to change the position of the player image, then I can simply make changes to my playerx and playery variable.

If we want that the player should change it’s position horizontally, then we can easily do it by changing the x coordinate that is inside the playerx variable.

And just like that if we want that the player should change it’s position vertically, then we can easily do it by changing the y coordinate that is inside the playery variable.

Remember that we need to write screen.blit() code inside our game loop after the for-loop but before pygame.display.update().

After doing that, your code should be looking like this:

So, now that’s for this article, For any further queries, drop it inside the comment section. Until then Enjoy learning.