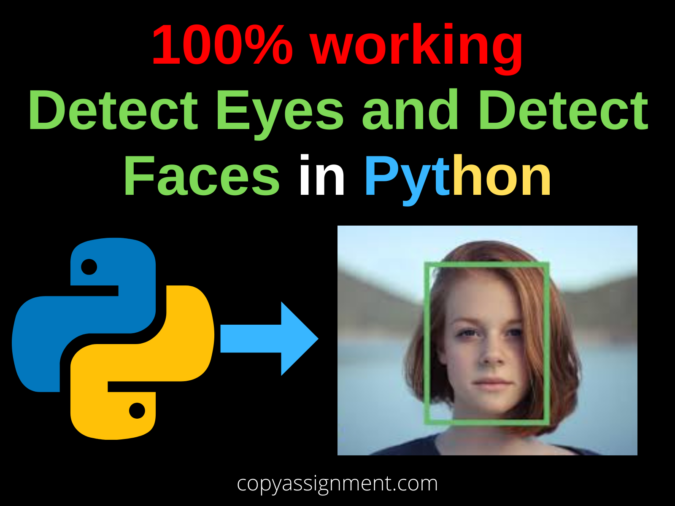 Welcome to copyassignment.com, In this article, we will see how to Detect Eyes and Detect Faces in Python using the very famous library OpenCV. So, Hello Readers, you probably have gone through many authentication phases which detect your face, mostly for security reasons. In smartphones also, we find the Face Detection feature which detects the faces automatically while clicking or editing or for lock purposes. CCTV’s, 3D trail applications, etc also detects the faces to give their services.

The machine doesn’t understand what Human is what Face is, but the Maker of the Machine does! And hence the algorithms and models work fine with the machines to make them a sense of Humans and Animals, Cats and Dogs, Houses and Buildings, etc. This is a type of Artificial Intelligence!

Well, these algorithms are thereby implemented into code in different programming languages and are used in so many intelligent gadgets.

And yes, our Python, highly supporting AI and ML, has a strong open-source library, OpenCV which provides powerful support in Image Processing, Machine Learning and Computer Vision, where CV being standing for ‘Computer Vision’.

In this article, let’s write actual code for ‘Face Detection using this very exquisite ‘OpenCV’ and Python step by step:

OpenCV is not only supported by Python but also by C++, Java, MATLAB in Windows, Linux, Mac OS, and Android as well!

OpenCV in Python uses Numpy. Numpy is a highly optimized library for numerical calculations and provides powerful functionalities including arrays. All the OpenCV array structures are converted to and from Numpy arrays.

Let’s install OpenCV and proceed ahead with our code:

Open your terminal and put the following code for installation:

Let’s use some of its functionalities provided by OpenCV and thereby proceed step by step with our code:

Yes, though, the library is named OpenCV but actually, it has to import the cv2 module.

As we discussed earlier, OpenCV uses Numpy for its effectiveness. Now what that actually means is, Numpy has strong array support. Numpy arrays have an interesting and wide range of methods.

And why we are discussing this? Because Every image used with OpenCV is nothing but a 3-dimensional Numpy Array!

This 3-dimensional Numpy array contains BGR values ranging from 0-255, where B stands for Blue, G for Green, R stands for Red. This value shows the BGR pixel value in an image.

Let’s make the above things practical:

1. path for the image and

2. way in which image has to be read -> its default value is cv2.IMREAD_COLOR i.e. 1 and the other two options available are cv2.IMREAD_GRAYSCALE which reads the image in gray mode n takes 0 as value and cv2.IMREAD_UNCHANGED reads as it is and takes the value as -1.

Now, to display the output we have to fire command.

imshow() is used to show the read image and takes two parameters: 1. window-name and 2. image to be returned

cv2.waitKey() specifies the total time duration of the display. If passed 0, it will showcase the output till any key is hit. It takes parameters as time in milliseconds. The function is very important as it avoids the Python kernel from crashing.

cv2.destroyAllWindows() closes all the open windows.

Now that our code is complete, let’s check for the output:

Now, let’s display in grayscale by changing the parametric value to 0 in imread()

By pressing any key on the keyboard, the window will automatically close.

Now, that the image displayed here, is too big we can actually resize it.

Here, cv2.resize() provides the ability to convert the image to the desired shape. Now, instead of providing the width and height of the image you can actually provide fx and fy to denote how many times you have to scale the original image.

fx and fy denotes x and y parameters for scalability.

As we discussed earlier, these images are NumPy arrays. So let’s print the image and let’s see the output:

From the output, it is very clear that the array is a 2d array with 424×424 pixels. Why 2d not 3d? Because the image has been read in grayscale, let’s make the compiler read the image unchanged and check for the shape.

Now you can see 3d array here with BGR values of each pixel.

The highlighted part is nothing but img.shape() which gives us the total count of dimensions present in the image.

Let’s jump into our main program:

OpenCV also provides a facility to capture and record videos.

VideoCapture() takes parameter as the id of the camera through which the object has to capture. Here 0 stands for first camera or primary/main camera, if your system has a lot of cameras, you can specify their number as 1, 2, 3, etc, depends on which the number of cameras you want to turn on.

Now, as the cap variable is storing all the frames that have been captured, it is important to set an infinite loop and wait for the keypress by the user to break the loop or close the camera. Also, it’s important to read the frame and showcase it using imshow().

cap.read() returns the frame captured and flag that specifies everything is working error-free.

The camera must be released so that other applications can use it if it’s required, hence cap.release().

To break the loop, i.e. to close the window/camera, it’s important to specify an instruction that will make the user escape from the window. Hence waitKey() is compared with the ord() of the desired characteristics that must be press to escape. In this case, the way to escape is by pressing the key ‘e’.

Note: ord(char) takes a char as a parameter and returns its ASCII value.

For detection of objects from the frame, it must be converted to grayscale as many operations in OpenCV are done through grayscale.

The method used for conversion is cv2.cvtColor().

2. color space conversion code -> specifies from which color system to which the source has to convert.

Now, if we display the gray instead of the frame, we can see the gray camera mode.

After face detection, the program must specify a rectangle or circle or eclipse any shape you desire to differ face from other objects.

Let’s see how to draw shapes with openCV in video capture:

cv2.rectangle() draws rectangle over the image/ video capture i.e. over the source and takes parameters as

You can see the rectangle over the image. Similarly, you can draw lines, eclipse, circles and can put the text as well!

For object detection, OpenCV has various classifiers. The object passed through the corresponding classifiers and returns the detected result if any. OpenCV has a ‘Haar Cascade Classifier’ which classifies eyes, face, upper body, etc

This classifier has corresponding XML files that must be passed through CascadeClassifier() as:

How will we detect face then? With the help of the above Haar Cascade path and using detectMultiScale() we can store coordinates of face/faces in a tuple.

2. scale factor -> specifies how much the image size is reduced at each image scale.

3. min Neighbors ->Parameter specifying how many neighbors each candidate rectangle should have to retain it.

Let’s dive into the main program by assembling these little functions that we learned:

Now it can also detect eyes just include Haar cascade eyes classifier as:

To detect eyes sharp and clear, what has been done here is, region_of_interest, ROI variable has made so that only the face region is passed through eye_cascade.detectMultiScale and then the rectangles for eyes have drawn on the actual frame image.

Let’s detect eyes and faces from an mp4 video. Include mp4 instead of camera id.

Just add mp4/img file path inside VideoCapture() and that’s it.

You can really play around with this imaging array and video files using NumPy functions. Do try!

For more information about OpenCV- Python and its functions, you can refer to: https://docs.opencv.org/master/d6/d00/tutorial_py_root.html

Thank you for climbing here!