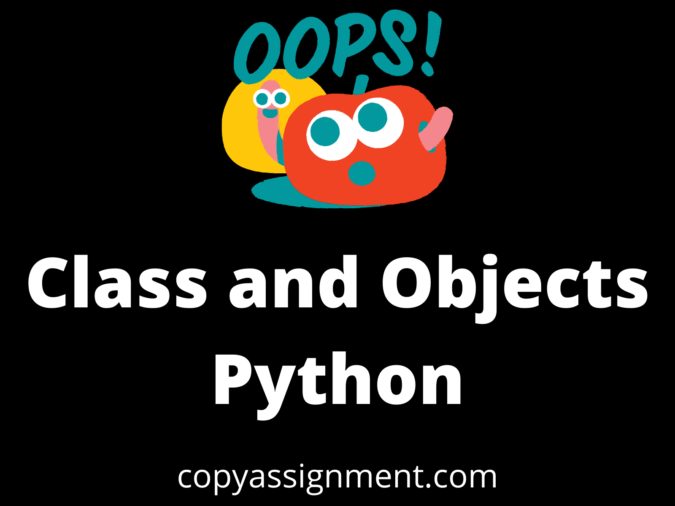 Python is an object-oriented programming language, and we have already implemented several object-oriented ideas. The concept of an item is crucial. An object comprises two parts: data and functions (called methods) that interact with it. Strings, for example, are objects in Python. The characters that make up the string are the data of the string object. Lower, replace, and the split are some ways. Everything in Python is an object. Not just strings and lists, but also integers, floats, and even functions themselves fall into this category. Let’s now talk about Python Class and Objects.

Classes offer a method of grouping data and functionality together. When you create a new class, you generate a new object that allows you to create new instances of that kind. All class instances may have attributes connected to them for preserving their state. Class instances may additionally have methods (specified by their class) for changing their form.

Python classes provide all the typical characteristics of Object-Oriented Programming: the class inheritance process supports multiple base classes. A derived class may override any methods of its base class or classes, and a method can call a method of a base class with the same name. Objects may hold any quantity and data. We can generate classes during runtime and change them further

Objects have different identities, and the same item may have several names in different situations, known as aliasing. While dealing with immutable basic types like strings and tuples, we can safely forget and ignore the aliasing in python. Aliasing has an unexpected impact on the semantics of Python programs using mutable objects such as lists, dictionaries, and most other kinds. The behavior of aliases is like pointers which prove to be advantageous for the program.

A namespace is a mapping that connects names to objects. Namespaces include the collection of built-in names (including functions like abs() and built-in exception names), the global names in a module, and the local names in a function invocation. In specific ways, an object’s collection of attributes is likewise a namespace. The essential thing to understand about namespaces is that there is no relationship between names in separate namespaces; for example, two distinct modules may define the function maximize without confusion. Users of the modules must prefix it with the module’s name.

By the way, we use the term attribute for any name that follows a dot — for example, a reel is an attribute of the object a in the phrase a.reel. Referencing names in modules strictly is an attribute reference: in the phrase modname.funcname, modname is a module object, and funcname is an attribute. There is a simple mapping between the module’s attributes and the global names specified in the module: they are in the same namespace.
Attributes may be customizable or read-only. Assignment to attributes is feasible in the latter situation. Modifications to module attributes are possible: You may also use the del command to delete readable attributes.

A scope is a textual area in a Python program where a namespace is immediately accessible. “Directly accessible” here indicates that a complete reference to a name tries to locate the name in the namespace.

All references and assignments are directed to the module’s global names in the middle scope if a name is declared global. To rebind variables discovered outside of the innermost scope, it may use the nonlocal statement; if not marked nonlocal, those variables are read-only.

It is critical to understand that scopes are decided textually: the global scope of a function declared in a module is that module’s namespace, regardless of where or by what alias the function is called. The actual search for names, on the other hand, is done dynamically, at run time — but the language definition is moving towards static name resolution at “compile” time, so don’t depend on dynamic name resolution! (In reality, local variables are already statically specified.)

Python has a peculiar feature in that assignment to names always fall into the innermost scope if no global or nonlocal statement is in place. Assignments do not transfer data; they associate names with objects. The same is true for deletions: the statement del x removes x from the namespace specified by the local scope. All actions that introduce new names make use of the local scope: import statements and function declarations, in particular, bind the module or function name in the local scope.

Example of Scope in Python

It is an example of how to refer to the various scopes and namespaces and how global and nonlocal influence variables binding.

It’s also worth noting that there was no previous binding for the name before the global assignment.

A class is a kind of object template. It includes the code for all the object’s methods. A simple illustration Here is a basic illustration of what a class looks like. It accomplishes nothing noteworthy.

We use the Class statement to create a class. Class names typically begin with a capital letter; most classes will have a __init__ method. The underscores imply it is a unique technique. It is called a constructor. When someone creates a new object from your class, the __init__() method is invoked automatically called the constructor. Constructors often do the initialization of variables. The constructor in the above program accepts two values, a and b, and assigns them to the class variables a and b.

In the above example, we can see that the Basic has overridden Derived’s method1, leading it to repeat the text seven times. The Basic has inherited Derived’s method2. Therefore it does not need to specify it. The Basic class also provides several additional features to the Derived class, including a new variable b and method, method3.

There are no “private” instance variables in Python that can only be accessed from inside an object. However, most Python code follows a convention that any word beginning with an underscore, for example, “_name” should be considered a non-public API component, whether a function, a method, or a data member. It should be seen as a possible implementation detail that may change at any moment. Python Class and Objects is a must-learn topic.

There is limited support for the method known as name mangling since there is a valid use case for class-private members to avoid name clashes between names provided by subclasses. Textually replace any identifier of the type spam (at least two leading underscores, at most one trailing underscore) with class name spam, where classname is the current class name with the leading underscore(s) deleted. This mutilation is done regardless of the identifier’s syntactic position, as long as it occurs inside the definition of a class.

Notice that code given to exec() or eval() does not regard the calling class’s classname as the current class; this is analogous to the impact of the global statement, which is also limited to code that is byte-compiled together. The same constraint applies to getattr(), setattr(), and delattr(), as well as explicitly accessing dict. Python Class and Objects is a must-learn topic, everyone should understand it clearly.

If you like this article leave a comment “Nice article!” to motivate us. Keep learning, keep coding!