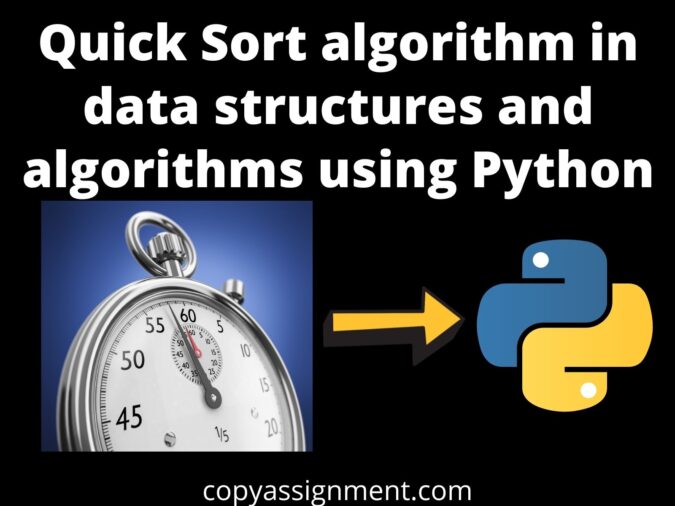 Quick Sort Algorithm is used to sort a given list or array into ascending or descending order depending on user preference. This sorting algorithm is very efficient and easy to implement.

Just like merge sort this sorting algorithm is based on the principle of divide and conquer.

In the following article, we will learn what is Quick Sort Algorithm and how to implement it using Python. We will first see how the sorting algorithm works and furthermore, we will study its algorithm, pseudocode, and lastly its actual implementation in Python.

Quick Sort is based on the principle of divide and conquer. This algorithm divides the given list or Array into two parts and then solve each part. The partition of the list is done using a pivot element. A pivot element is an element of the list itself.

There are many ways to decide on a pivot element:

The Array is divided such that all the elements to the right of the pivot element are greater than or equal to the pivot and the elements to the left are smaller than the pivot. We implement this sorting algorithm using a recursive call. Using recursion is far more simple and convenient than doing it by iteration.

Step 1: Take 7 as the pivot element and divide the array into 2 subarrays.

Step 3: Once again the partition will take place using 6 as the pivot element.

Step 4: After the sorting is done the final output will be:

Step2: Partition of the given list/array about the pivot element.

Step3: Passing these smaller arrays to the recursive calls.

We will use two functions to implement this sorting algorithm namely partition() and quick_sort(). The quick_sort() will first call the partition() function on the given array and then call itself recursively on those divided parts of the array.

Space Complexity: In programming, space complexity is defined as the memory space occupied by the program to run and execute all its functions. Similar to the time complexity there are three cases to consider while evaluating the space complexity:

Yes, quick sort is an in-place sorting algorithm as it does not require any other data structure like another array to perform its operations. Furthermore, it does not create any copies of its subarrays.

As the time complexity of the quick sort depends on the initial input sequence, so yes quick sort is an adaptive sorting algorithm just like insertion and bubble sort.