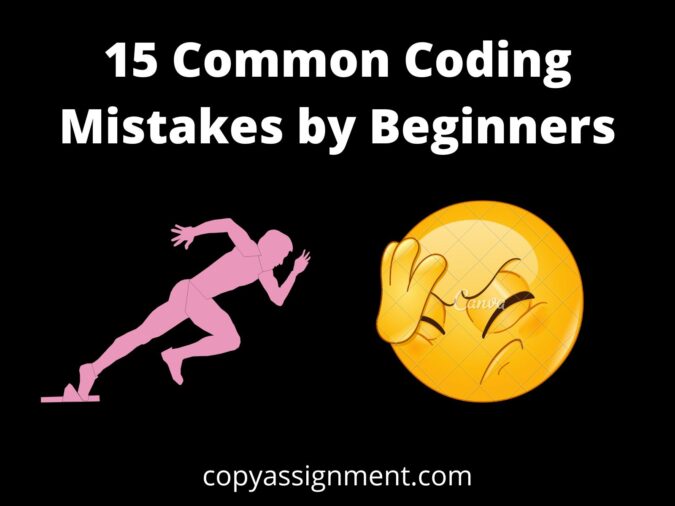 Hey everyone! In this article, we are going to talk about the most common 15 beginner coding mistakes that you should avoid to become a good programmer. There are many mistakes that noob coders make when they are just starting out with the coding. These mistakes actually cause them to become a bad programmer or have bad programming experiences or take a lot longer to learn to code. So, Let’s get started.

Most Common Coding Mistakes by Beginners

Switching between programming languages is one of the very common coding mistakes that a lot of people do. They try to learn many languages simultaneously. They start with C++ and then after 1 week they switch to Java or say Python then after 1 week they switch to Javascript. Sometimes beginners also try to learn 2 languages at the same. Imagine learning C++ and Python together. Learning more than one language at the same time is a very bad idea. You should avoid this mistake as a beginner. Choose one language and stick with it. Because the main goal is to learn concepts of programming.

2. No Roadmap for learning Coding

Next coding mistake the beginners make is not having a proper roadmap for whatever they want to learn. This is very important to understand that if you don’t have any deadlines or schedule or plan for your whole journey of learning to code you’ll pretty much lost into the world of programming. Because see you can not learn a programming language “completely”. You should know beforehand which topics you’re going to cover and in how much time. Without any schedule or deadline, you might get stuck with one language for a long time or you might leave that language in between and switch to another one.

Lone wolf programming means you are just learning alone. Instead, you should always try to do peer programming. Like you and your friend learning the same language together. This will be beneficial for both of you. You can discuss your doubts, share resources with each other, discuss problems, solution approaches, and so on. It will also help you to prevent procrastination because in the back of your mind you’ll always try to learn more than your friend.

Tutorial Hell means you’re just watching tutorials one by one without making your hands dirty (without writing code on your own). Neither you’re making notes nor you’re applying them on your own. If you don’t write the tutorial code by yourself at least once you’ll not get grip on that topic and you’ll watch that tutorial again and again. Ultimately you’ll fall into a loop of watching tutorials only aka tutorial hell.

This is one of the very common mistakes that beginners make while learning to code they don’t solve problems related to that particular topic which they just learned. Suppose, If you’re learning Binary Search today then you should solve at least 4-5 problems on any coding platform like Leetcode, SPOJ, or InterviewBit. If you’re learning any language build some basic projects along with your learning. Apply your knowledge! Build something, upload it on Github, and show it to your friends!

Not saving their code or not maintaining any online backup of your work is one of those coding mistakes that programmers make quite often. We save our work on our local system only and forget to upload it anywhere. Just imagine if your hard disk got crashed or any other tragedy happens to your system, you’ll lose all your hard work in less than a minute! Also if you need your code somewhere else, where you don’t have your PC or laptop then what you’ll do? Write that again..? No right! So it’s really important to keep your work online for your future reference so that you can access it from anywhere. You can use GitHub to upload your serious projects and blogger to keep tutorial notes and code.

Data Structures and Algorithm is the most important thing in your whole coding journey. You can not succeed in the world of programming leaving DSA behind. So always put your time in learning DSA and do development and practice side by side. And also don’t jump to advance data structures directly first cover basic data structures.

Beginners have some fear or self-doubt when they first start coding. They sort of like compare themselves with others maybe with their seniors or their own batchmates who are now reached to a particular level and you’re just starting out. So you’ll feel like they have done so much in their 1st year or 2nd year so I should also do this. So, don’t compare yourself with others instead get motivated with others. Talk to them, ask about some guidance, learn from their experience. And remember whatever you’re doing, whatever you’re learning is great! Quality is more important than quantity. Don’t go for a lot of things.

The next mistake is lack of code formatting and ignoring the code quality. When people are just starting out with coding in general they’re like let me first learn all this stuff who’s watching my code? Why should I care about proper indentation and formatting stuff? This is a big mistake because then it becomes a habit. And then you’ll have to pay later for this. So it’s better if right from the scratch you do proper formatting and indentation of your code. Also, use relevant variable names and function names as well.

Comments are notes to future self. If you don’t use comments, your own code will look like an alien to you after some time. So don’t forget to put comments to describe what one piece of code does. However, it’s also important to avoid over commenting as a beginner. Use relevant, short, and sweet comments.

We have a lot of platforms for DSA practice and competitive coding. So beginners make this coding mistake that they run behind most of the platforms like Codechef, Codeforces, HackerRank, HackerEarth, Leetcode, InterviewBit, SPOJ, Topcoders, and many more. But we would suggest don’t go behind many platforms for placement preparation.

The next beginner coding mistake is that they do not debug their program. Debugging your program is really important. Most beginners don’t really know about debugging. So, learn about how to debug your code, debugging pointers (it allows you to see the flow of your program), and so on. All these things are really helpful in logic building and improving problem-solving skills.

Practicing should never stop. You should not stop solving coding problems. If you stop coding for a long time and then come back to problem-solving you’ll take some time to again go into that flow of approaching any problem. So, solve at least one coding problem daily avoid these coding mistakes to become a good programmer.