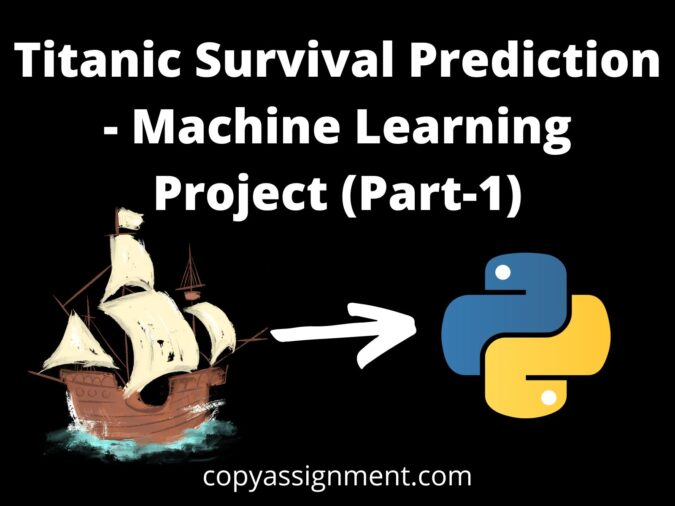 Hey, everyone! Today we’re going to work on our first Machine Learning Project and that is “Titanic Survival Prediction”. It’s going to be a really cool project. You’re going to apply all your machine learning skills in this project. Titanic survival prediction is a classification problem where your target is to predict whether the passenger of titanic will survive or not. I hope you’re excited about this project.

So before starting, you need to have lots of things on your system like python, anaconda (jupyter notebook), and many python packages like numpy, pandas, sklearn, etc. But wait, what if I tell you, you don’t need any one of them to make this project. Yes, we are not going to download anything on our system. You just need to sign up on Kaggle. Kaggle is a great platform that holds machine learning competition and provides real-world datasets. It offers a no-setup, customizable, Jupyter Notebooks environment. Now, this article will be more focused on how to think about machine learning projects, rather than just implementation. I suggest you to practice the project in Kaggle itself with me.

The sinking of the Titanic is one of the most infamous shipwrecks in history. On April 15, 1912, the widely considered “unsinkable” Titanic sank after colliding with an iceberg. Unfortunately, there weren’t enough lifeboats for everyone on board, resulting in the death of 1502 out of 2224 passengers and crew.
Goal: Build a predictive model that answers the question: “what sorts of people were more likely to survive?” using passenger data like age, gender, class, etc.

So, we’re going to solve this challenge from scratch and also submit our notebook on Kaggle under this competition. We’re going to cover everything like how to deal with the data, how to analyze data through different plots and graphs, how to do data preprocessing, and finally how to predict things.

Now this is your notebook where we’re going to make our whole project. Don’t delete the given code. Just press shift + enter to run this cell & to start your session. After this you’ll see this.

Congratulations! You have successfully settled up all the required things.

So first we will understand our titanic dataset. This is a dataset of Titanic ship passengers & here

You’ll see two options in your notebook Code & Markdown. Markdown are for creating bookmarks/notes. Code is for actual coding.

As you can see we have 891 entries in total but some of the columns have less than 891 entries so that means we have missing values in these columns namely Age, Cabin & Embarked. So we have to preprocess our data first before training our ml model.

Now we will analyze our data to see which variables are actually important to predict the value of the target variable. Hence, we are going to plot a heat map to see the correlation between the parameters and the target variable (Survived).

Now see the decimal values in the above color 2D matrix. These values are the correlation values. Just compare the survived column with the rest of the columns. The lighter the color is the more correlated the value is. Let’s compare the Survived with Sibsp you’re getting the value -0.035. It means that SibSp is not correlated to Survived.  Then Parch has a 0.082 value which shows very little correlation. Then Age, again no correlation. In the end, we have Fare whose value of correlation with the Survived variable is 0.26 which shows that the more the fare is, the more are the chances of survival.

Conclusion: But it does not mean that the other features are useless. We’ll explore more about them later.

Moving on, now we will understand all the features one by one. We’ll visualize the impact of each feature on the target variable. Let us start with SibSp that is the no. of siblings or spouses a passenger has.

SibSp – Number of Siblings / Spouses aboard the Titanic

To visualize surviving probability with respect to SibSp we will plot a bar graph.

We’ll plot a graph so as to see the distribution of age with respect to target variable.

For gender we are simply going to use seaborn and will plot a bar graph.

You can see from the above graph it’s quite obvious to say that man has less chances of survival over females. (Remember the Titanic scene when everyone was saying “Women and children first!” I want you to comment down “YES!” if you remember this scene.)

Let us now see whether the class plays any role in survival probability or not.

That’s all about data exploratory analysis. Now we have a good idea about our data. And one more thing to notice here is there are some features which have nothing to do with survival probability like PassengerId, Ticket number, Cabin number and also the name of the passenger. So we can safely drop them before building our ml model. Moreover, we also need to handle missing values. So, all of these tasks come under Data Preprocessing.

We’re going to cover further topics in the next part till then keep learning & keep coding! Make sure you drop a comment “Nice article!” if you like this article.

Here’s the complete code we’ve discussed so far in this article: Kaggle Notebook.