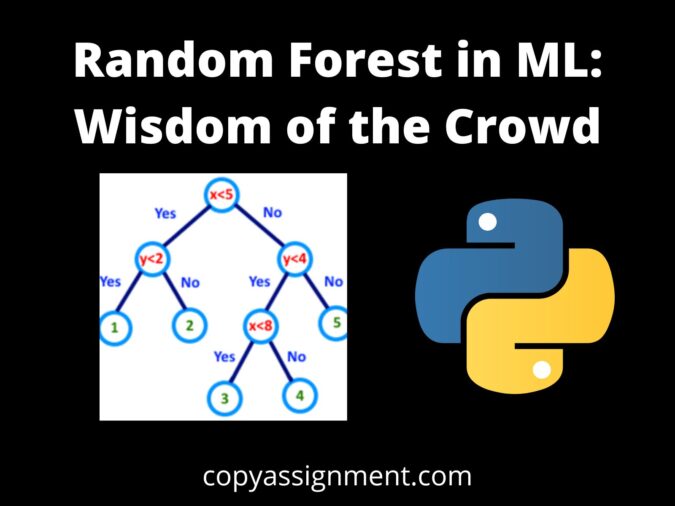 We’ve learned about some algorithms in machine learning via which we can solve classification and regression problems. In the previous article, we learned how decision trees work, but the problem was that decision trees tend to overfit. But does there exist a use in which you can use decision trees to get even better results? Yes my friend there is an algorithm called Random Forest that uses not one but multiple decision trees to give a final prediction. Such a type of learning where you use multiple algorithms to get better predictive performance is called Ensemble Learning and we’ll learn about them.

Random forests are an ensemble learning method for classification, regression, and other tasks that operates by constructing multiple decision trees at training time. For classification tasks, the output of the random forest is the class selected by most trees.

Let’s take an example, It’s lockdown and all the classes have shifted to an online format and so have the exams. The teachers decided to create a difficult paper but allowed the students to help each other. Now our main character John tried to break into the group of intelligent students but they didn’t let him in. Poor John. But John is optimistic so he created his own group of average students which he called Examgers and devised a study plan to complete the syllabus for the exam.

Each and every student studied hard but on the day of the exam, the paper was quite a bit hard making it difficult to verify if one’s answer is the correct one. So they came up with a strategy, a brilliant one. They decided that everyone will attempt the same question and the answer that was in the majority will be the correct one. For example, If the question is fine if 256 is a perfect square then every member of Examgers will solve it and give their answers, and the answer given by the majority will be the final answer.

Let’s say 4 people said yes 256 is a perfect square and 2 said no it isn’t then the final answer would be Yes since it was decided by the majority. In the end, John’s group performed very well and the faces of intelligent students were a sight to see.

The way that John’s Group gave the exam is quite the same as that of the working of Bagging. Let’s understand bagging more in-depth.

So in the previous articles, we saw how we can use various algorithms to predict a class and give its corresponding features of it. Bagging is an ensemble learning technique that combines the learning of multiple models to get a better-combined performance. It reduces overfitting and improves model stability. Bagging consists of 2 steps: Bootstrapping and Aggregation.

Bootstrapping is a technique by which we can create multiple smaller samples from a larger sample. One thing to note the smaller samples are created by drawing data points at random with repetition i.e. we might draw the same data point multiple times.

Now we have our trained models, but how do we combine their learning? After all, when given testing data each model may provide a different answer. That’s what aggregation is all about. Let’s take a look.

Now Random Forest works the same way as Bagging but with one extra modification in Bootstrapping step. In Bootstrapping we take subsamples but the no. of the feature remains the same. But in Random forest, we also randomly select features to use in the smaller sub-sample. Let’s say we have data with 6 features(f1, f2, f3, f4, f5, f6) and 1000 data points. Then we create 3 smaller samples that look like this:-

Now we’ll train 3 decision trees on these data and get the prediction results via aggregation. The difference between Bagging and Random Forest is that in the random forest the features are also selected at random in smaller samples.

Random Forest is present in sklearn under the ensemble. Let’s do things differently this time. Instead of using a dataset, we’ll create our own using make_classification in sklearn. dataset. So let’s start by creating the data of 1000 data points, 10 features, and 3 target classes.

Now that we have our training and testing data let’s create our RandomForestClassifier object and train it on the training data. To train the data we use the fit() method like always. Let’s do it.

Let’s make a confusion matrix for our predictions. You can find confusion_matrix in sklearn. metrics.

Hope you enjoyed learning and got what you need.

Comment if you have any queries or if you found something wrong in this article.