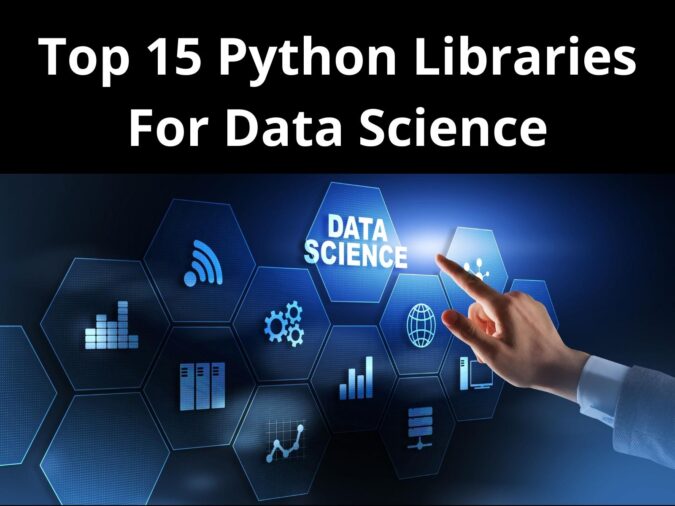 In this informative article, we look at the most important Python Libraries For Data Science and explain how their distinct features may help you develop your data science knowledge.

Python has a rich data science library environment. It’s almost impossible to cover everything in a single article. As a consequence, we’ve compiled a list of the top 15 Python Data Science Libraries below.

Here is the list of the top 15 Python Libraries For Data Science in 2022:

Spark is a unified analytics engine for analyzing enormous amounts of data. It includes high-level APIs in Scala, Java, Python, and R, as well as an efficient engine for data analysis that supports broad processing graphs. It also supports a wide range of higher-level tools, such as Spark SQL for SQL and DataFrames, the pandas API on Spark for pandas workloads, MLlib for machine learning, GraphX for graph processing, and Structured Streaming for stream processing.

To Learn More About Gensim: Gensim in Machine Learning

Scikit-learn, a free Python package that is sometimes seen as a direct extension of SciPy, is based on NumPy and SciPy. It was created primarily for creating supervised and unsupervised machine learning algorithms and data modeling.

Scikit-learn is user- and beginner-friendly due to its straightforward, intuitive, and consistent interface. Scikit-learn excels in data modeling, which limits its application, but it does a great job of letting users edit and exchange data any way they need to.

XGBoost is a distributed gradient boosting toolkit that has been developed to be very efficient, adaptable, and portable. It uses the Gradient Boosting framework to construct machine learning algorithms. XGBoost offers parallel tree boosting (also known as GBDT, GBM) to address a wide range of data science issues quickly and accurately. The same code may tackle problems with billions of instances on major distributed environments (Kubernetes, Hadoop, SGE, MPI, Dask).

To Learn More About XGBoost: XGBoost Part 1 (of 4): Regression

LightGBM, an abbreviation for Light Gradient Boosting Machine, is a free and open-source distributed gradient boosting framework for machine learning that was created by Microsoft. It uses decision tree algorithms to do ranking, classification, and other machine learning tasks. The development team is concentrating on performance and scalability.

To Learn More About LightGBM: 196 – What is Light GBM and how does it compare against XGBoost?

Yandex created CatBoost, an open-source software package. It includes a gradient boosting framework that, among other things, seeks to solve for categorical features using a permutation-driven alternative to the traditional technique. It is available in Python, and R, and works on Linux, Windows, and macOS, and models produced with catboost may be used for predictions in C++, Java, C#, Rust, Core ML, ONNX, and PMML. The source code is accessible on GitHub under the Apache License.

To Learn More About CatBoost: Catboost Tutorial on Google Colaboratory with free GPU

Before forwarding the data to data processing and machine learning training, it is helpful to visualize data using the Matplotlib module in Python. It creates graphs and charts using object-oriented APIs and Python GUI toolkits. Additionally, Matplotlib offers a MATLAB-like user interface so that users may perform operations that MATLAB can perform. This open-source, free package offers multiple extension interfaces that connect the matplotlib API to a variety of other libraries.

To Learn More About Matplotlib: HOW TO USE Matplotlib in 4 MINUTES (2020 Python Tutorial)

To Learn More About StatsModels: Introduction to statsmodels

Beautiful Soup is a Python tool that allows you to parse HTML and XML texts (including having malformed markup, i.e. non-closed tags, so named after tag soup). It generates a parse tree for parsed pages, which may be used to extract data from HTML for web scraping.

Bokeh is a Python interactive visualization framework that allows for attractive and understandable data visualization in current web browsers. Using Bokeh, you can quickly and simply develop interactive graphs, dashboards, and data apps.

To Learn More About Bokeh: Python Data Visualization With Bokeh

The free and open-source TensorFlow Python library specializes in a type of programming known as differentiable programming, which allows for the automatic computation of a function’s derivatives in high-level languages. TensorFlow’s adaptable architecture and framework enable the quick development and evaluation of both machine learning and deep learning models. On desktop and mobile devices, machine learning models may be visualized using TensorFlow.

For use in real-time computer vision projects, OpenCV is a library with a variety of programming capabilities. It is able to recognize people, objects, and handwriting after processing a range of visual inputs from picture and video data.

Computational effectiveness was a consideration in OpenCV’s design. The library makes the most of its multicore processing capabilities to enable applications to place a significant emphasis on real-time data processing. Additionally, it has a vibrant and encouraging online community that sustains it.

The open-source data visualization software ggplot2 is written in the statistical programming language R. Hadley Wickham created ggplot2 in 2005 as an implementation of Leland Wilkinson’s Grammar of Graphics—a comprehensive framework for data presentation that divides graphs into semantic components like scales and layers. ggplot2 may be used in lieu of R’s base graphics and has a variety of defaults for the online and print presentations of popular scales. Since 2005, ggplot2 has increased in popularity to become one of the most widely used R utilities.

To Learn More About GGplot: ggplot for plots and graphs. An introduction to data visualization using R programming

Scrapy is a Python-based web crawling platform that is free and open source. It was initially intended for web scraping, but it may also be used to collect data via APIs or as a general-purpose web crawler. It is now maintained by Zyte, previously Scrapinghub, a firm that develops and provides online scraping services.

Scrapy’s sophisticated features, such as auto-throttle, rotating proxies, and user agents, allow you to scrape practically undetectable throughout the internet. Scrapy also includes a web-crawling shell that developers may use to test their assumptions about a site’s behavior.

To Learn More About Scrapy:  Scrapy for Beginners – A Complete How To Example Web Scraping Project

There are hundreds of libraries for Data Science. This implies that in addition to those on the list, there are more top-notch libraries. The scope of this study would be too large to address them all. This section will thus review some of the top machine learning libraries that are currently available. Here is a summary:

Complex mathematical operations and multidimensional data are handled by Numpy. A quick computing tool called Numpy can do basic algebraic operations as well as Fourier transformations, random simulations, and shape changes. This library has an advantage over standard Python built-in sequencing because it was designed in C. Numpy arrays beat Pandas series when it comes to indexing, and Numpy performs better when there are fewer than 50k records.

To Learn More About Numpy: Numpy Tutorial in Hindi

A tool for manipulating time series and numerical data is called Pandas. Data frames and series are used, respectively, to define three-dimensional and two-dimensional data. For quick searches across big datasets, it also includes facilities for indexing a tonne of data. It is renowned for its data reshaping skills, pivoting on user-defined axes, handling of missing data, merging and linking databases, and data filtering functions. For handling large datasets, Pandas is incredibly convenient and quick. It surpasses the Numpy when records are beyond 50,000.

To Learn More About Pandas: LEARN PANDAS in about 10 minutes! A great python module for Data Science!

Plotly is an open-source Python 3D data visualization platform with over 50 million users worldwide. It’s a data visualization tool for the web based on the Plotly JavaScript library (plotly.js). Scatter plots, histograms, line charts, bar charts, box plots, multiple axes, sparklines, dendrograms, 3-D graphs, and other chart formats are all supported by Plotly. Plotly distinguishes itself from other data visualization frameworks by including contour plots. Plotly can generate web-based data visualizations that may be included in Jupyter notebooks or Dash web applications or exported as independent HTML files.

SQLAlchemy is a Python database toolkit that facilitates access to data warehouses. It includes the most often used patterns for high-performance database access. SQLAlchemy’s two primary components are SQLAlchemy ORM and SQLAlchemy Core. SQLAlchemy core offers a layer of abstraction to Python database APIs and features. It also provides users with SQL statements and schema. SQLAlchemy ORM is an object-relational mapper that is self-contained. SQLAlchemy enables developers to manage their databases while also automating repetitive tasks.

To Learn More About SQLAlchemy: SQLalchemy Python Tutorial – operate on databases without SQL. In less than 10 min!

The Python ecosystem is large, with numerous libraries waiting to be discovered by data scientists, and these are just a handful of them. Look through ProjectPro’s repository for end-to-end Data Science projects that use these Python packages for data science and machine learning. We hope you liked our article on Top 15 Python Libraries For Data Science in 2022.