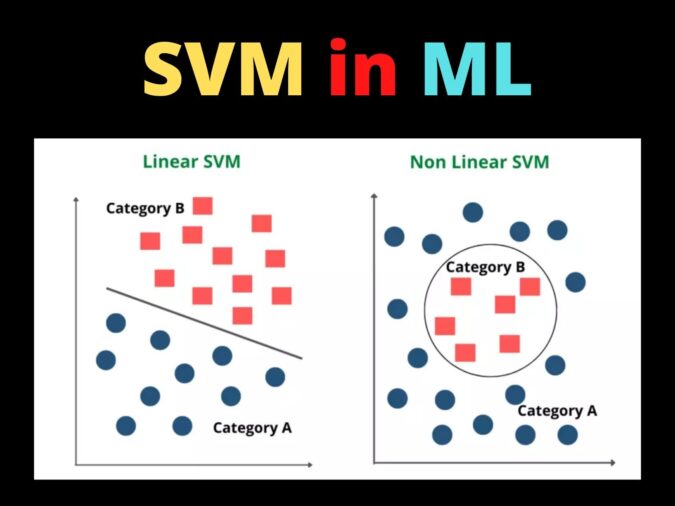 In the Machine Learning series, following a bunch of articles, in this article, we are going to learn about Support Vector Machine Algorithm in detail. In most of the tasks machine learning models handle like classifying images, handling large amounts of data, and predicting future values based on current values, we can choose different algorithms to fit the problem we are trying to solve. But do you know there’s an algorithm in machine learning that’ll handle just any data you can throw at it? Interesting right? Before starting with the algorithm get a quick overview of other machine learning algorithms.

What is a Support Vector Machine(SVM)?

Support Vector Machines are a set of supervised learning methods used for classification, regression, and outliers detection problems. All of these are very common tasks in machine learning and the Support vector machine is the best choice in many cases. Some of the examples where we can use them are, to detect cancerous cells, predict driving routes, face detection, handwriting recognition, image classification, Bioinformatics, etc.

The main point to keep in mind here is that these are just math equations tuned to give you the most accurate answer as quickly as possible. Support vector machines are different from other classification algorithms in the way they choose the decision boundary that maximizes the distance from the nearest data points of all the categories. The decision boundary created by SVM is called the maximum margin classifier or the maximum margin hyperplane.

Some of the important concepts in SVM which will be used frequently are as follows.

How does SVM works?

A simple linear SVM classifier works by making a straight line between two groups of data. That means all of the data points on one side of the line will represent a particular category and the data points on the other side of the line will be put into a different category. This means there can be an infinite number of lines for us to choose from.

What makes the linear SVM algorithm better than some of the other algorithms, like k-nearest neighbors, is that it chooses the best line to classify the data points. The algorithm chooses the line that separates the data and is the furthest away from the closest data points as possible. If we select a hyperplane having a low margin then there is a high chance of misclassification.

An important function in the implementation of the SVM algorithm is the SVM kernel. It is a function that takes low dimensional input space and transforms it into a higher dimensional space. That is it converts a not separable problem or difficult classification problem into a separable problem. It is mostly useful in non-linear problems which we will discuss in the latter section.

SVM algorithm can be understood better with the following example. Suppose we want to build a model that can accurately identify whether the given fruit is an apple or banana. Then without any extra thought, we can decide that such a model can be built by the SVM algorithm.

From the example image, we can get an overview of the working of the SVM model. The model classifies the new input as an apple with the help of features it understood with the training samples.

Support vector Machines can be of two types based on the type of the data. They are Linear SVM and Nonlinear SVM.

Linear SVM is used in the case of linearly separable data. It means if a dataset can be classified into two classes by using a straight line, then such data is termed linearly separable data, and we can use the Linear SVM classifier. The formula of the linear kernel is as below which says that the product between two vectors is the sum of the multiplication of each pair of input values.

The working of the Linear SVM algorithm can be understood by using an example. Suppose we have a dataset that has two categories of data represented by blue and red. We want a classifier that can classify the pair of coordinates in either red or blue, which is plotted as follows.

Non-Linear SVM is used in the case of non-linearly separated data. It means if a straight line cannot classify a dataset, then such data is termed non-linear data, and we can use the Non-linear SVM classifier.

The working of the Non-Linear SVM algorithm can be understood by using an example. Suppose we have a dataset that has two categories of data represented by blue and red. We want a classifier that can classify the pair of coordinates in either red or blue, which is plotted as follows.

So we got to know the process of segregating the two classes with a hyper-plane. Now, the question is how can we identify the right hyper-plane? Well, the answer to this is select the hyperplane which segregates the two categories in a better way.

From the above image, we can understand the major difference between the linear and non-linear SVM types.

We’ll start the implementation of the Support Vector Machine, by importing a few libraries that will be useful for our project.

Next, we will load our dataset into the code. For the implementation of our SVM model, we can use the iris dataset present in the sklearn library. After loading the data, while assigning the dependent and outcome variable, we only take the first two features to make our model simple.

Let’s provide the value of the regularization parameter and create the SVM classifier object for the linear kernel.

In this article, we gained an overview of a Machine learning algorithm, Support Vector Machine in detail. We discussed its working, the important parameters, implementation in python, and finally its pros and cons. You can use the SVM algorithm for your model and analyze the power of this model by tuning the parameters.