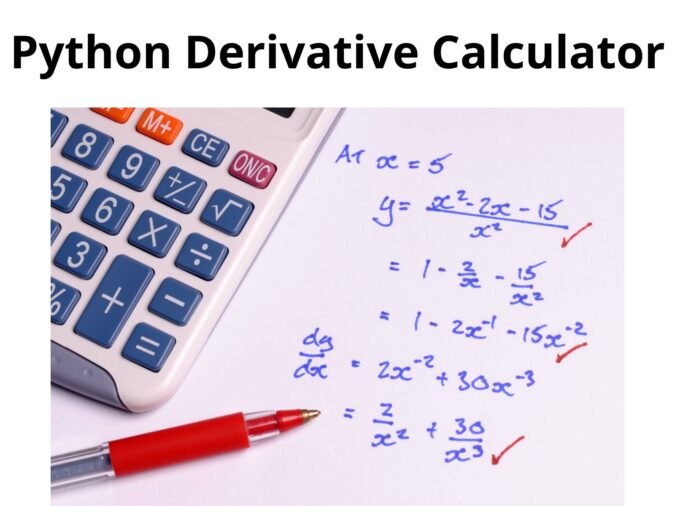 Today, in this article, we will develop a Python Derivative Calculator, one of the most significant requirements of mathematics and statistics students all the time. Derivatives are also used for solving machine learning optimization problems. In order to move closer and closer to the maximum or minimum of a function, optimization methods such as gradient descent employ derivatives to determine whether to raise or reduce the weights.

The Derivative Calculator is an online tool for calculating the derivatives of functions.

A derivative is a function that quantifies slope. It is obtained by differentiating a function of the type y = f(x). When x is replaced with the derivative, the slope of the initial function y = f(x) is obtained.

There are several methods to describe the act of differentiation, often known as locating or calculating the derivative. The choice of notation is influenced by the kind of evaluated function and individual taste.

Now, Let’s take an example to understand this in detail :

After applying all the rules of differentiation, we got the following result:

Firstly, determine which portion of the original function (y = 5*x^3 +2*x^2+3*x+4) is of interest. For instance, imagine you need to determine the slope of y when the value of the variable x is 3. Substitute x = 3 into the slope function and solve:

For symbolic differentiation, we will need the SymPy package. y for symbolic mathematics in python there is a library called SymPy python library. It intends to be a comprehensive computer algebra system (CAS) that can be used as either a standalone application or a library for other applications. if SymPy is not installed in your python, kindly use the term:

Other Python distributions, such as Anaconda, Enthought Canopy, etc., may already have SymPy. To validate, enter the following at the Python prompt:

python SymPy library is really helpful in developing a standard derivative calculator or in performing other mathematical functions.

In SymPy python, library variables are not automatically defined. you need to define them on your own or explicitly by using symbols. symbols produce Symbols from a string of variable names separated by space or commas. Symbol is essentially the same as a variable in SymPy on developing a derivative calculator we are using a list for defining the multiple symbols.

if the equation has only one variable, you can define it as:

if the equation has multiple variables, you can define them as:

these symbols can be used to create symbolic expressions in python are:

So, by using Symbol x that we just defined, let’s create a symbolic expression(function) in Python for example function f(x) = 4x2+5x+8:

Calculating values within the expression

So we can create symbolic functions and calculate their derivatives, but how do we apply them? We must be able to enter a value and get a solution from these equations. With the subs approach, we may replace values with symbolic equations. The subs method substitutes a provided value for each occurrence of a variable. subs return a new expression; it has no effect on the original expression. Here, we substitute 3 for x in the df formula and initialize it in d:

In this article, we see what is derivative and how can we create a Python Derivative Calculator. To create the derivative calculator using Python, we have used Python’s SymPy library in which Sym stands for the symbol. This was not tough but was not easy as well and we encourage you to research this topic and try more on this.

We hope you find this tutorial helpful.