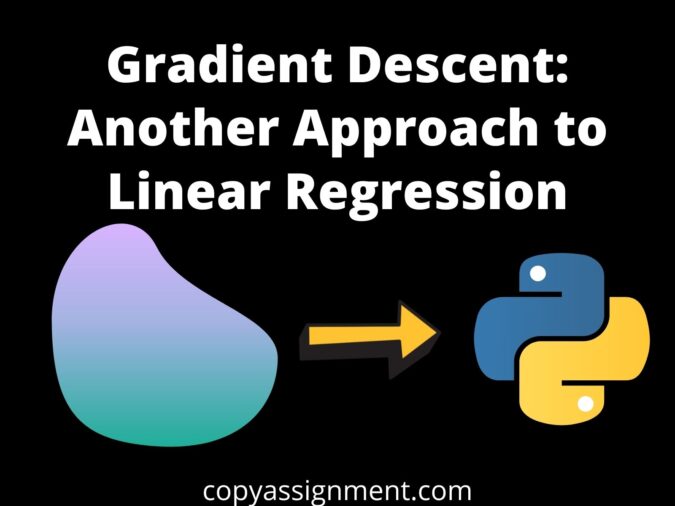 In the last tutorial, we learned about our first ML algorithm called Linear Regression. We did it using an approach called Ordinary Least Squares, but there is another way to approach it. It is an approach that becomes the basis of Neural Networks, and it’s called Gradient Descent. And don’t get intimidated by the name because the approach is actually quite easy and we’ll understand how to implement it using sklearn too.

It’s recommended that you know the basics of multivariable calculus, if you are not familiar with it you can learn it here. It’ll be better if you understand Linear Regression Intuition, you can read our tutorial about it here.

The Intuition Behind Gradient Descent

So in machine learning, we usually try to optimize our algorithms like we try to adjust the parameters of the algorithm in order to achieve the optimal parameters that give us the minimum value of the loss function. So where does Gradient Descent helps in optimization, and more importantly, what does it do?

Gradient Descent is an optimization algorithm that is used to find the local minima of a differentiable function.

If the above statement didn’t make much sense it’s fine I’ll break it down. The first part says Gradient Descent is an optimization algorithm which means we can use it to optimize our model parameters we’ll understand how but now it’s clear why we need it.

Now as you can see the graph with that pointy angle thing in (0,0) is not differentiable and the smooth curve on the left is. Now refer to the following image for a refresher on local and global minima and maxima.

Now that we have everything cleared out let’s start by understanding gradient descent with a classic example of the mountaineer. So let’s imagine that we have our friend john who reached the top of Mount Everest. Wow, that’s something to be proud of but now he needs to reach the bottom so John starts taking steps in the direction that point to the bottom of the mountain something like this:-

Gradient Descent starts with random inputs and starts to modify them in such a way that they get closer to the nearest local minima after each step. But won’t it be better to achieve global minima? It’ll be but gradient descent can’t, gradient descent can only the nearest local minima. And as you might have guessed if a function has multiple local minima then the one chosen by Gradient Descent depends on the random input we choose at the beginning.

But what is our function? What is its input? If we can’t achieve global minima then how does gradient descent optimize it?

If you’ve read the previous article you’ll know that in Linear Regression we need to find the line that best fits the curve. That line was given by the following Hypothesis:-

our aim was to find the parameters θ0, θ1,…,θn. Now in OLS we simply had a formula that when fed the input found the θ matrix. But in gradient descent, we start by taking the random values of the parameters and then keep on modifying them until we find the value of parameters close to the local minimum of the function. WAIT! What is this function?

Well, my bad let me explain. The aim of linear regression is to find the best fit line but how do you define the best fit line? Well, the best-fit line was the line that when placed in the scatter plot had all the points as close to it as possible. But how do you measure this mathematically?

We can define a function to find out how well our line’s predictions are w.r.t. to the training set and for that we’ll use a metric called Mean Squared Error or MSE for short. Wow, that’s a weird name. Let me explain. Mean squared error is defined as the mean of the sum of the square difference between the predicted value of the target and the actual value of the target. It is calculated with the following formula:-

And this is the function whose value we have to minimize using Gradient Descent. In short, we have to find the value of the parameters closest to the local minima of the MSE function.

MSE fits the description it has only one minimum and that is the global minimum. Now that we have the above stuff cleared let’s start talking about the steps in Gradient Descent.

We start by randomly assigning values to our parameters. This will be the starting point in the curve, you can assign all the values as 0 or randomly assign them any values it’s up to you.

Now let’s calculate the derivative of our loss function we’ll call J(θ) for simplicity. J(θ) is nothing but the MSE function.

As we can see the predicted value, ŷ depends on the parameters

Great, that means at each iteration of Gradient Descent we update our parameters by subtracting the product of our partial derivative and that weird alpha symbol from it. But you might be confused regarding what that alpha is used for. That alpha is a vital hyperparameter called the Learning Rate. It basically defines how fast we achieve convergence or local minima point.

If the learning rate is too low then the convergence will be slow and if it’s too high the value of loss might overshoot. Hence it’s important to find an optimal learning rate. Usually, we start from 0.1 and keep updating it by dividing it by 10 until the optimal rate is found. Like : 0.1, 0.01, 0.001, …

Repeat step 3 for x epochs or iterations. Assuming the learning rate is optimal with each epoch your training loss keeps reducing.

In sklearn, Linear Regression in linear_model uses OLS to find the values of parameters but to use Linear Regression using Gradient Descent we use SGDRegressor present in linear_model. SGD stands for Stochastic Gradient Descent. We’ll use the diabetes dataset present in sklearn, in that dataset is a dictionary with features matrix under key data and target vector under key target. So let’s start by loading the data.

Now that we have our data let’s create our SGDRegressor object and train it on the data. To train the data we use the fit() method as usual. max_iter is used to define the max epochs and alpha is used to set the learning rate.

Now let’s check how accurate the model is by finding the RMSE value. For this model, it came out to be 54.03.

As mentioned, this algorithm takes one example per iteration. Let (x(I), y(I) be the training sample

Let hθ(x) be the hypothesis for linear regression. Then, the cost function is given by:

I hope you enjoyed learning and got what you need.

Comment if you have any queries or if you found something wrong in this article.