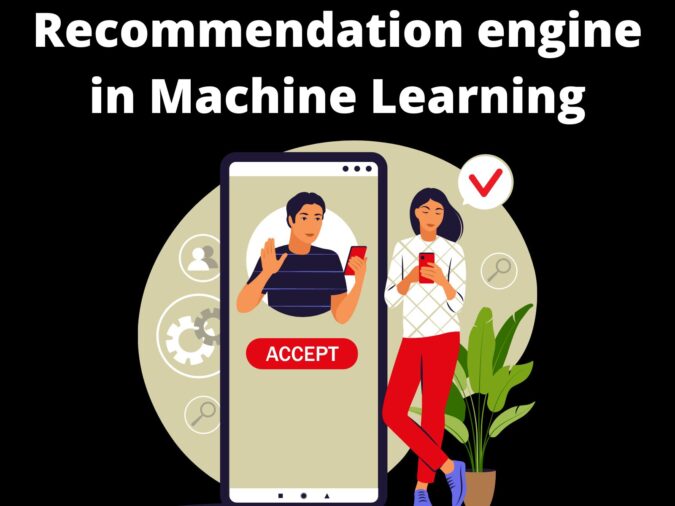 What is a Recommendation System?

Recommendation engine in Machine Learning benefits the users in finding items of their interest. It helps item providers in delivering their items to the right user. The recommender system helps to identify products that are most relevant to users. It also helps to provide users with personalized content thus helping companies to improve user engagement.

Recommendation engine in machine learning systems helps users discover new products and services. Every time users shop online, a recommendation system guides them towards the most likely product they might purchase. Recommender systems are like salespeople who know what you like based on your history and preferences. This system attracts customers with their preferable product and, leads to more sales and increase profit for the company.

There are a variety of applications for recommendations including movies on Netflix, consumer products on Amazon or similar e-commerce sites, music on Spotify, and social media platforms like Instagram, news, and advertising.

The online music player app Spotify would recommend songs similar to the ones you’ve repeatedly listened to or liked so that you can continue using their platform. Amazon uses recommendations to suggest products to various users based on the data they have collected for that user.

There are 2 types of Recommendation engines in Machine Learning-

Collaborative recommendation engines are based on past interactions between users and the target items. Thus, the input to a collaborative system will be all historical data of user interactions with target items. This data is typically stored in a matrix where the rows are the users, and the columns are the items. The core idea behind such systems is that the historical data of the users should be enough to make a prediction. There are two categories of collaborative systems namely memory-based and model-based systems.

Memory-based systems operate over the entire user-item database to make predictions. These systems employ statistical techniques are employed to find the neighbors of the active user and then combine their preferences to produce a prediction. Once a neighborhood of users is formed, these systems use different algorithms to combine the preferences of neighbors to produce a prediction or top-N recommendation for the active user. The techniques used in this algorithm are also known as nearest-neighbor or user-based collaborative filtering.

In Model-based algorithms, the input is the user data to estimate or learn a model of user ratings. Model-based collaborative algorithms provide item recommendations by first developing a model of user ratings. The model-building process is performed by different machine learning algorithms such as Bayesian network, clustering, and rule-based approaches. This approach applies association rule discovery algorithms to find associations between co-purchased items and then generates item recommendations based on the strength of the association between the items.

Some other examples of collaborative recommendation systems in machine learning are:

In a movie recommendation application, a movie may be represented by such features as specific actors, genre, director, story, etc. The user’s interest or preference is also represented by the same set of features, called the user profile. Recommendations are made by comparing the user profile with items expressed in the same set of features. The top-k best matched or most similar items are recommended to the user.

Some other examples of content-based recommendation systems in machine learning are :

Steps to build a Recommendation engine in Machine Learning

This is the first and most step in building a recommendation engine. The data can be collected by two means explicitly and implicitly. Explicit data is information that is provided intentionally, and that can be input from the users such as movie ratings. Implicit data is information that is not provided intentionally but gathered from available data streams like search history, clicks, order history, etc.

After collecting and storing the data, we have to filter it so as to extract the relevant information required to make the final recommendations. There are various algorithms that help us make the filtering process easier.

The performance of a recommendation system can be assessed through various tactics which measure coverage and accuracy. The method of evaluation of a recommendation is solely dependent on the dataset and approach used to generate the recommendation. Recommender systems share several conceptual similarities with the classification and regression modeling problem. The common statistical accuracy measures to evaluate the accuracy of a recommender engine are RMSD, MAE, and k-fold cross-validation.

Let us consider a model, which will predict how well a user will rate an item based on a set of features. Here, the K fold cross-validation method can be used to infer the results of the model through accuracy metrics. This method is the same as a train test split, except we create many K randomly assigned training and test sets. Each individual training fold is used to train on the recommendation system independently and then measure the accuracy of the resulting systems with the test set. Then, the accuracy score is calculated to know how well the recommendation system is learning. This method is beneficial to prevent your model from overfitting.

Root Mean Square Deviation is a similar metric to MAE but has a heavy penalty when the prediction is very far from the true value and a lighter penalty when the prediction is near the true value. It is performed by taking the squares of the difference between true and predicted values instead of the sum of the absolute values. Lower the RMSD score better the recommendation system.