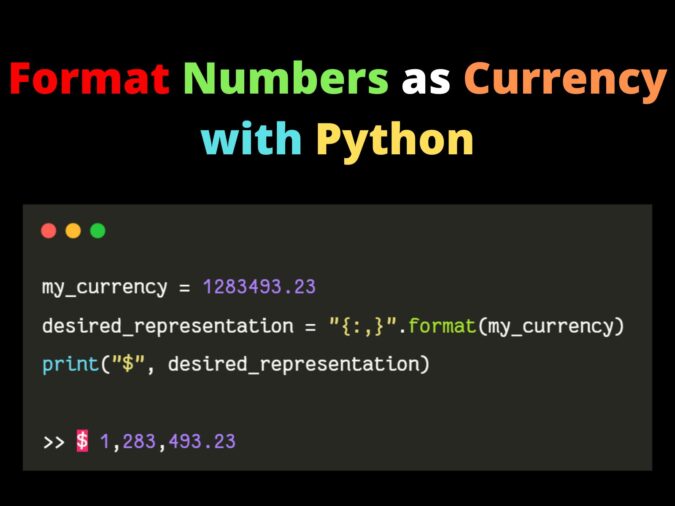 This blog will discuss how we can format numbers as currency (an integer representing currency in standard currency format) with Python. While programming, most of our data comes in normal integer or float format; hence, when representing it in our app, we need to format it as though the app users have a good experience. There are several ways to do this.

1. Format Numbers as Currency with the Python format() method:

The easiest way to format numbers as currency in Python is using the .format() method of string. This way is one of the basic methods taught for strings in Python. We will write plain Python code and not use any modules, which might sometimes mess things up and make our application buggy. Documentation of .format() method: https://docs.python.org/3/library/stdtypes.html#str.format

In this method, we will use a module named “locale” built into Python while installing. This module will help us localize our python application and localize the representation of currency. This method will also help us write a single set of codes and not worry about which region the user will run the code. Python will automatically detect the region and serve our application data based on our localization.

This method will use ‘babel.numbers’ from the “Babel” module. This module will help us to convert the given standard integer numeral into a currency format for our application. This method might be a little tedious because it does not come built-in in Python version 3.8 and before.

First, install Babel using the following command in the command line or terminal.

Thanks for reading this blog until the end. To learn more about basic scripting with Python, you can read other blogs on this website with the category: https://copyassignment.com/category/python-projects/.

I am Ankur from Nepal trying to learn different aspects of Information Technology and Physics. I like building websites and minor projects with Python.
Github