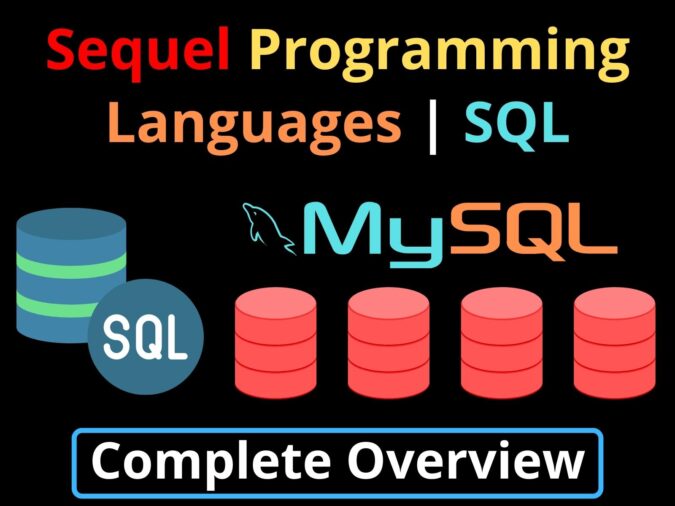 In this article, we are going to learn about Sequel Programming Languages(SQL). Big enterprises like Facebook, Instagram, and LinkedIn, use SQL for storing the data in the back-end. So, If you want to get a job in the field of data, then it is the most important query language to learn. Before getting started, let me clarify that all these are the same-> SQL, sequel programming languages, sequel coding language, sequel computer language, sequel database language, etc. The sequel is a pronounced word for SQL i.e. while speaking SQL, people say sequel. Let’s get started!

What is Sequel Programming Language?

A database is a collection of data. SQL is a language designed for accessing, modifying, and extracting information from databases. SQL lets you perform CRUD operations (Create, Read, Update or Delete) operations on a database. It is mainly useful in handling structured data, that is data incorporating relations among entities and variables.

Database Management System(DBMS) is a software interface between the database and end-user responsible for authentication, concurrency, logging, backup, optimization, etc. Some of the examples of most common Relational DBMS are as follows

When we are executing the command of SQL on any Relational database management system, then the system automatically finds the best routine to carry out our request, and the SQL engine determines how to interpret that particular command. Structured Query Language contains the following four components in its process:

A classic query engine allows data professionals and users to maintain non-SQL queries. The architecture of SQL or Structured Query Language is shown in the following diagram

The sequel computer language(SQL) is being utilized in many applications around the world. From the phone’s social networks to computer applications, tech bits utilize SQL in some form. Some of the applications of Sequel Programming Languages are

How To Use Structured Query Language(SQL)?

The scope of SQL includes data query, data manipulation (insert, update and delete), data definition (schema creation and modification), and data access control. Although SQL is essentially a declarative language, it also includes procedural elements. Most SQL commands are used with operators to modify or reduce the scope of data operated on by the statement. Some commonly used SQL commands are as follows

These SQL statements can use loops, variables, and other components of a programming language to update records based on different criteria.

CREATE STATEMENT – The CREATE command is used to create a new SQL database or SQL table. Most versions of SQL create a new database by creating a new directory, in which tables and other database objects are stored as files.

INSERT – This command helps in inserting the data or records into the database tables. We can easily insert the records in single as well as multiple rows of the table.

UPDATE – This command is used to make changes to rows or records in a specific table.

DELETE – This command helps in removing or erasing the saved records from the database tables. It erases single or multiple tuples from the tables of the database.

DROP– Deop command helps in deleting the entire table, table view, and other objects from the database.

SQL is an easy-to-learn language specifically designed to work with databases. There is a growing demand for professionals who can handle sequel database language. Almost every big company uses SQL. It is widely used in various sectors like ticket booking, banking, social media platforms, data sharing, eCommerce, etc., so there are vast opportunities available for the SQL developer.

Some of the roles that can benefit from SQL experience include the following:

In this article, we have discussed SQL concepts. Sequel programming languages are used in multiple industries to save the database. Therefore, it is beneficial to use and learn SQL to become a developer. Hope you find this article useful. Thanks for reading!