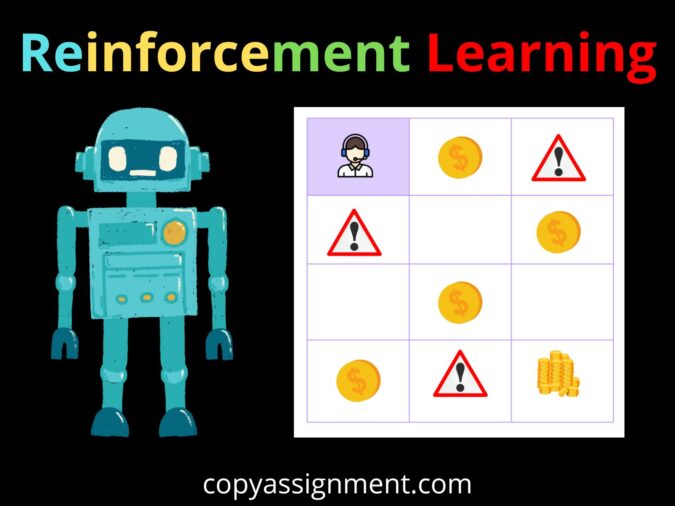 In this article, we are going to get insights into Reinforcement learning in Python which is an important subdomain of Artificial Intelligence. In recent years, there are a lot of improvements in this fascinating area of technology. One of the exciting examples includes DeepMind and the Deep Q learning architecture of Reinforcement Learning, beating the champion of the game of Go with AlphaGo.

What is Reinforcement Learning?

Reinforcement Learning is one of the Machine Learning methods that deal with how software agents should take action in an environment. The agent receives rewards for performing correct actions and receives penalties for performing incorrect actions. The core principle to note is that the agent learns without intervention from a human.

In reinforcement learning, and artificial intelligence model handles a game-like situation, which has trial and error to come up with a solution to the problem. The ultimate goal of the reinforcement model is to maximize the total reward starting from totally random trials and finishing with better results.

Comparison of Reinforcement learning with Supervised and Unsupervised learning

Positive Learning is defined as an event, that occurs because of specific behavior. It increases the strength and the frequency of the behavior and impacts positively on the action taken by the agent. This type of Reinforcement helps you to maximize performance and sustain change for a more extended period. However, too much Reinforcement may lead to over-optimization of the state, which can affect the results.

Negative Reinforcement is defined as the strengthening of behavior that occurs because of a negative condition that should have been stopped or avoided. It helps you to define the minimum stand of performance. However, the drawback of this method is that it provides enough to meet up the minimum behavior.

In this reinforcement learning algorithm, the agent receives no policy, meaning its exploration of its environment is more self-directed. The policy is essentially a probability that tells it the odds of certain actions resulting in rewards, or beneficial states.

Q-learning is a model-free reinforcement learning that tends to find the best course of action, given the current state of the agent. Model-free means that the agent uses predictions of the environment’s expected response to move forward. It does not use the reward system to learn, but rather, trial and error.

Depending on the current state of the agent in the environment, it will decide the next action to be taken. The main objective of the model is to find the best possible action given its current state. For that, it may come up with rules of its own or it may operate outside the policy given to it to follow. This means that there is no actual need for a policy to the model, so we call it off-policy.

These algorithms utilize neural networks in addition to reinforcement learning techniques. The main objective of Q-learning is to learn the policy which can inform the agent what actions should be taken for maximizing the reward under what circumstances. Future actions are based on a random sample of past beneficial actions learned by the neural network.

Consider, that there is an AI agent present within a maze environment, and its goal is to find a reward. The agent interacts with the environment by performing some actions, and based on those actions, the state of the agent gets changed, and it also receives a reward or penalty as feedback.

The agent continues doing these three things which are taking action, changing state/remaining in the same state, and getting feedback. By doing these actions, the agent learns what actions lead to positive feedback or rewards and what actions lead to negative feedback penalty. As a positive reward, the agent gets a bonus point, and as a penalty, it gets a negative point.

Implementation of Reinforcement Learning in Python

Let’s do a simple implementation of Reinforcement Learning in Python to understand the concepts of RL which we discussed so far in a better way. We can either use Google Colab(https://colab.research.google.com/ ) for implementation or install the random package and code on the local system with Python software.

To check if the action taken by the agent was correct or wrong, some logic needs to be involved. But, here, let’s choose one of the rewards randomly using the random package.

We use two classes, Environment and Agent in our model.

The environment class represents the agent’s environment. The class must have member functions to get the current observation or state where the agent is, what are the points for reward and punishment, and keep track of how many more steps are left that the agent can take before the game is over. In this example, consider a game that the agent must finish in at most ten steps.

The agent class is simpler compared to the environment class. The agent collects rewards given to it by its environment and makes an action. For this, we will need a data member and a member function.

Until the game is not over, which is checked by the while loop, the agent takes an action by invoking the step function of the Agent class by passing obj which refers to the agent’s environment. The reward here can be positive(in case of 1) or negative(in case of -1) and will be added to the total rewards of the agent.

On executing the code, we will get the rewards accumulated by the agent in each and every step up to 10 steps. The output differs with each time we play the game.

I hope you found this article helpful. Comment down if you have any doubts or want an article from us.

1 thought on “Reinforcement learning in Python”