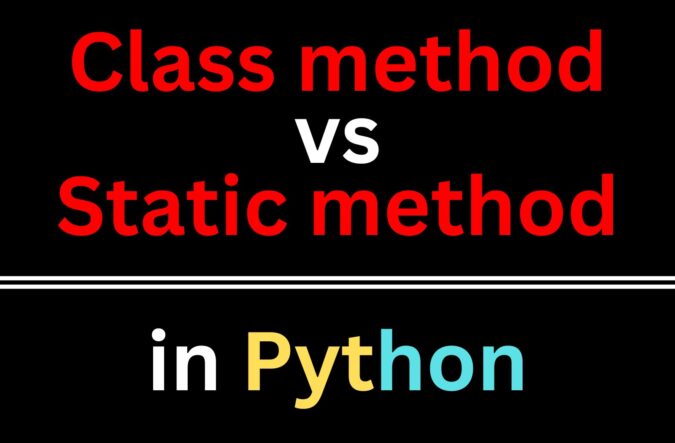 We all know that Python is the most famous language in today’s computer industry. In such a scenario knowing its core concepts gets important. Today, we will discuss the Class method vs Static method in Python.

Particularly for students coming from a Java background, where there are no class methods, this issue of class methods and static methods often arises while studying Python. These may be defined in Python using the corresponding decorators. So now let us take a look at them along with examples.

3 Types of Methods in Python

Let us understand each method using an example

The very first method in MyClass is the instance method, which is a typical instance method. That is the straightforward, hassle-free approach you will most frequently adopt. As you can see, the method only accepts the self parameter, which when called, links to a MyClass object (but of course, instance methods can accept more than just one parameter).

You can read more about the instance method here as we will be discussing Class method vs Static method.

When a class method is invoked, the cls argument, which points to the class rather than the object instance, is sent. ally identify a class, leaving just the function that has to be converted to be supplied as an argument. @classmethod Python has a built-in function called a decorator. It may be used with any class method. By employing this technique, we may also alter the value of variables.

As we are familiar with class methods, understanding a static method is extremely simple. Additionally, because it may be used without an object, it is simpler to implement than a class method. However, we may also use a class or any instance to access it.

Python’s static methods and class methods are quite similar, however, a static method is connected to a class rather than the objects for that class. The @staticmethod decorator, a built-in decorator, is used to declare a static method. Additionally, using decorators does not need to import any modules. When a class has a static method, we allow only class objects or codes inside the class to access it.

Static methods don’t need to know anything about the class in which they are included. Only the instances of the class may access them since they are only produced in the class. For straightforward functionality that is frequently unrelated to the class, we can utilize a static method. For instance, if we want to add two integers together but only want the class or its instances to be able to utilize it, we will build a static function. Since it simply needs the numbers to add, it won’t need any class-related data, but it will still serve its purpose because it functions as a private method that only members of the class may access.

A class method may accomplish the majority of the static methods’ features. However, we prefer the static technique since it might help our program run quicker and more efficiently because we don’t need to supply self as a parameter.

Difference between Class method and Static method in Python