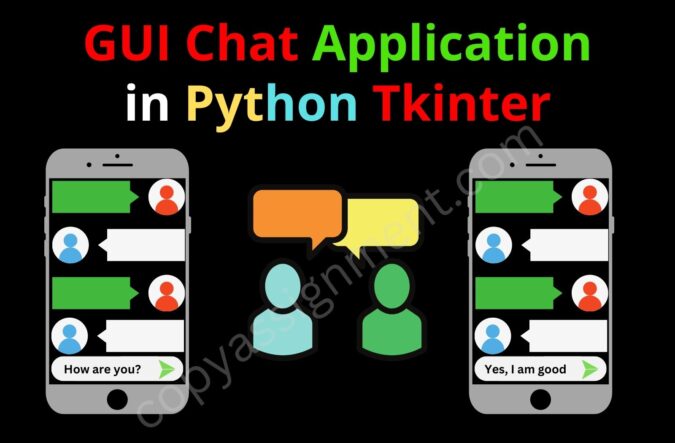 The process of conversing, engaging, and/or exchanging messages through the Internet is referred to as chatting. It involves two or more people communicating via a chat-enabled service or program. Chat can be given via the Internet using text, voice, or video communication. A chat program is made up of two fundamental components: a server and a client.

A server is a computer program or hardware device that offers functionality to other programs or hardware. A client or clients are simply persons who wish to communicate with one another. Also, clients first need to connect to the server and then the server will work as a medium between clients. The chat program we’ll create will be more like a chat room than a peer-to-peer chat. As a result, numerous users can connect to the chat server and submit messages. Any message is sent to every chat user that is connected.

Creating a server for Chat Application in Python

In order to receive inbound requests from customers wishing to interact, I first constructed a chat server. I employed multithreading and plain ol’ sockets for this. It was possible to use frameworks like Twisted and SocketServer, but I felt it would be overkill for a program as straightforward as ours.

Socket: A socket looks and behaves much like a low-level file descriptor. In Unix, every I/O action is done by writing or reading a file descriptor. A file descriptor is just an integer associated with an open file and it can be a network connection, a text file, a terminal, or something else. A socket is bound to a port number so that the TCP layer can identify the application that the data is destined to be sent. On the client side, the client knows the hostname of the machine on which the server is running and the port number to which the server is listening.

To make a connection request. If everything goes well, the server accepts the connection. Upon acceptance, the server gets a new socket bound to the same local port and also has its remote and endpoint set to the address and port of the client.

Threading: Message threads are a running commentary of all the messages sent in your chat app. They appear within a group, private message, or channel. Threads appear in chat rooms, emails, and even the comment section of blogs. Learning how to master the art of threaded conversations will improve your teamwork.

When a new client connects, we add it to our collection of client sockets while listening for forthcoming client connections. For each client that is connected, start a new thread that continuously monitors the client for any incoming messages and broadcasts them to all other clients. The code below establishes a TCP socket, binds it to the server IP, and then waits for incoming connections:

When recv() is called, it will wait for data to arrive. If no data is available, recv() will not return (it ‘blocks’) and the program pauses until data arrives. Calls like accept() and recv() that make the program wait until some new data has arrived, allowing it to return, are called blocking calls. Data is sent and received over the network as bytestrings, and hence need to be encoded and decoded using encode() and decode() respectively.

recv() takes in one argument, bufsize, which specifies the maximum amount of data to be received at once.

send(), on the other hand, sends data from the socket to its connected peer.

One problem with both send() and recv() is that there is a slight possibility that only part of the data is sent or received because the outgoing or incoming buffers are almost full, so it queues whatever data it could while leaving the rest of the data unprocessed. This becomes problematic when send() returns, but in fact, some of the data is still left unsent. We could put send() in a loop, or we could use sendall() as a simple way to say “I want to send all of the data”.

I hope I was able to explain much of the theory to you when developing the server script. The same criteria apply here, except that we have a Send thread that is always waiting for command-line user input. We will add a graphical user interface later, but it will follow much of the same philosophy. Any data received will be displayed on the client interface, and any data sent will be processed by the server to be broadcast to other connected clients.

Again, we make use of multithreading. This time, it is to let the sending and receiving operations run alongside each other. This way, our chatroom is real-time (instead of alternating between send() and recv() calls).

Coding client side for Chat Application in Python

We’re not quite finished yet, but how about creating a graphical user interface? Tkinter, which is included in the Python standard library, will be used.

We only need to make a few changes to client.py and add some extra code to construct the GUI. Reading the documentation for Tkinter will teach you more about it, but it is outside the scope of this lesson.

Debug the server.py file first, then execute client.py. The GUI will appear after executing client.py! You can have up to 5 clients.

I developed this so that you can interact with the program through the GUI, making it easy to debug and observe what is going on behind the scenes.

Then GUI Will Pop up!

We have created GUI Chat Application in Python Tkinter from scratch. We created two important Python files client.py and server.py. Client file has been created for the chat interface and the server file will handle the backend. That’s it. I sincerely hope you liked reading it as much as I did writing it. This was only the tip of the iceberg in the fascinating field of computer networking.