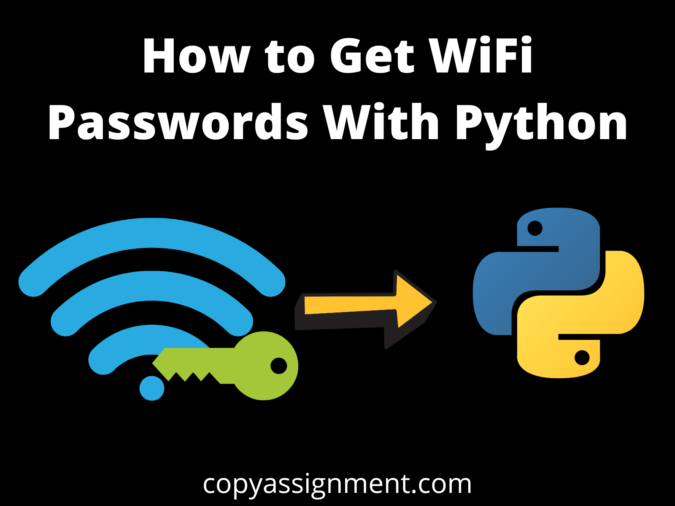 Today we will learn how can we Get WiFi Passwords With Python. Sometimes we forget our own connected wifi password. And when someone asks for the password to connect with the same network we decline. In this article, we are going to learn how we can see wifi passwords with python.

Explanation: Get Wifi Passwords with python

In order to get wifi passwords, we are going to use the subprocess module of Python which makes it easy to check the connected wifi passwords by allowing us to run (cmd)command prompt commands inside our program. We have two netsh commands using them we can easily see wifi passwords.

Logic is very simple, we will run cmd commands to check wifi passwords inside our program with the help of the subprocess module as mentioned above.

The two cmd commands to check connected wifi passwords are as follows:

Here we will use these two commands in our own way to Get WiFi Passwords With Python.

The stepwise flow of code

The main intention behind this section is that if you have a good knowledge of python then you’ll be able to make this get wifi passwords with the python program on your own without looking at our source code. So, the steps of implementation are as follows:

Step4: Iterate over the list and run the second command to check the passwords.

Step5: Store the passwords and print

We have added comments to every single line of code. We hope that it will help you a lot now as well as after some months when you look at this code without reading the explanation. One more thing, you are free to use this code but don’t forget to add your own styling to this.

If you found this article useful please support us by commenting “nice article” and don’t forget to share it with your friends and enemies! If you have any queries feel free to ask in the comment section.