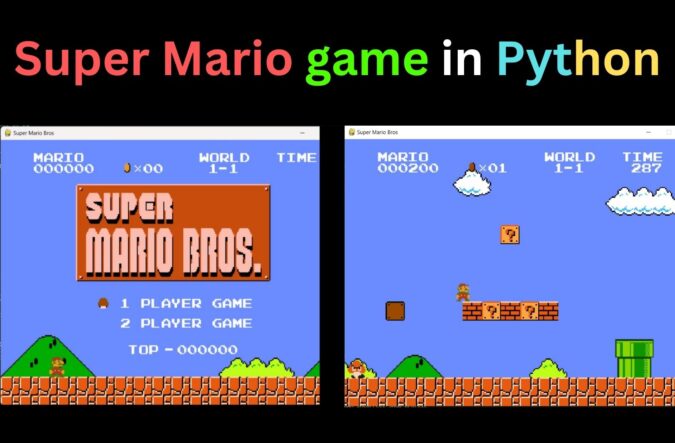 Have you ever wanted to have the power to create the Mario game from scratch? Now, you can create your own Super Mario game in Python and Pygame! This step-by-step tutorial with source code will walk you through the entire process, from setting up the game environment to creating your own Mario game in Python.

In addition, we’ll be able to customize the game by adding characters, levels, and power-ups to make the game unique. So get ready to explore the world of game development and learn how to create a Super Mario game in Python using Pygame.

Setting Up the Game Environment

The sprite module will contain our sprites (i.e., your characters, coins, blocks, etc.). It’s important to separate our game design and game logic because we want to minimize the dependencies between our modules so that they are easier to understand and modify.

We’ll also need to install the Pygame library( pip install pygame==2.1.3.dev8 ), allowing us to create the game from scratch. You can find installation instructions here. Once you have Pygame installed, you should be able to open up your Python IDE and start creating your game.

Designing the Level and Adding Sprites

Now that we have our environment set up for the Mario game in Python, it’s time to create the level for the game. A level represents the game space that includes the general environment and obstacles that the player needs to overcome (e.g., ground, grass, rocks, trees, mountains, vines, clouds, and rivers). We can create the level using a graphical editor like Tiled. There are also many visual-level design tools available online.

You can create a level by placing various sprites, such as coins, blocks, and vines. Once we have your level designed, we will need to save it as an image file (.png) and then load it into your Python IDE. You can also find thousands of sprites online, which you can use to create various characters and obstacles in your game.

Once the level is designed, you can start programming the character movement. First, we’ll need to import the pygame library in our IDE and then write a few functions for a player to do the following things:

We can also choose whether the enemy should go down a level or stay on the same level. To make our enemies more challenging, We can add conditions to their movement, such as going toward the player only if the player is close to them. Also, we add an idle state to make your enemies stop moving when the player is far away from them.

When the player gets close to the enemy, the enemy should start running toward the player again. Then create a function to generate a new enemy at a random location whenever the player goes down a level.

Adding the Power-Ups and Coins

Adding the Title Screen and Game Over Screen

Now that We have completed most of our game Create a title screen and a game over screen to finish the game. Which tells the player how many coins they’ve collected and their score. You can create your title screen using a logo or a picture, and you can create your game over the screen by using a message to inform the player that the game has ended.

Now that you have completed your game, you can test it to ensure that it works as expected. You can also use feedback from friends and family to improve the gameplay of your game. Once you have made the necessary changes to your game, you can publish it online for people to play.