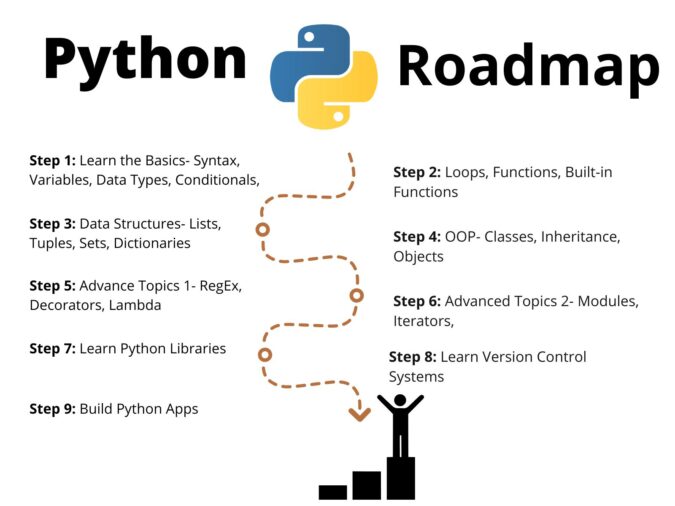 Welcome to Python Complete Roadmap for Beginners. Today, we will see a sequence of topics that a beginner should follow to learn Python. Python is the most beginner-friendly language known in the world, and sometimes it feels like we are reading English. So, learning Python is not so tough because of its simplicity. Also, there are many advantages of learning Python you can try it in many fields if you know Python because Python offers a large number of libraries using them you can try or switch to any other field like web development, data science, software engineering, networking, ethical hacking, etc. Now, let’s see the Complete Python Roadmap for Beginners in 2022.

Python syntax is one of the easiest because it includes simple and easy declarations of variables. It is a dynamic type of Programming language. When starting learning with Python, you should first master the syntax of Python. You should first learn how to use print() and input() methods of Python which are used to print and take input from users. Then you should learn how to declare and use variables in Python. Variables are the data containers. Data types are also important to learn. There are many types of data in Python e.g. number, string, set, boolean, list, dictionary, complex, etc. Conditional is part of basic Python. Conditionals in Python or any other programming language are used to execute a block of code only on certain conditions.

A loop is a block of code that runs many times. A for loop runs according to the variable limit specified during for loop declaration. Functions are declared with def keyword in Python. Functions are a block of code inside the function name, while in the calling function, the whole code inside the function gets executed. Functions make code reusable and more readable. Python provides many built-in functions that can be helpful many times, and they make our work easier.

OOP stands for Object Oriented Programming in computer science. This is an important topic to learn. Whenever you will be interviewed, you may face any number of questions about OOP concepts from definition to coding using OOP. OOP in computer science has been introduced so that coders can code while thinking of real-world entities. OOP makes it easy to solve real-world problems with its ability to resemble with real-world scenarios. Classes and objects are the two building blocks of Object Oriented Programming. Inheritance is an important concept of OOP which help to implement OOP in a better way.

RegEx stands for regular expressions. You can use regular expressions in Python with re module. RegEx is used to search a pattern in strings. Decorators are a feature in Python. You should know that everything is an object and the classes and functions too are objects in Python. Variables just point to objects in Python. We can pass objects to Python functions and as functions are objects so we can pass functions to functions, and this feature of Python is called decorators. Lambda is simple to understand. Lambda is a one-line function in Python that’s it.

Modules are pre-written codes with .py extension. They give some specific functionality. They can be used by importing them into our codes. You can use import statement to import a module. There are many built-in modules available in Python, and you can create your own modules as well. An iterator in Python is an object that has some countable elements and can be iterated. We can convert iterable objects(lists, tuples, etc) to iterator object with iter() method.

Python is famous for many things and one of them is its huge number of libraries. You may get a library for any of your work. Libraries make it easy to write big programs with shortcodes. There are built-in and third-party libraries in Python. You can install a library with the pip command(pip install library_name). Mastering libraries give you the superpower to make your work super easy. Some libraries are very famous as they give too much power to Python developers like for data science and machine learning, there are libraries that need to be learned without a second thought like, scipy, numpy, scikit-learn, PyTorch, etc.

At last, you should create Python apps and projects to create a good portfolio. If you have good Python Projects in your portfolio, then it will increase your chance of selection for an interview. You should choose a field and start creating projects in that field. For example, if you choose web development, then you should create web apps with Django or flask, Django is one of the most demanding skills in today’s world and most companies prefer Django over any other framework irrespective of any language.

This was a Complete Python Roadmap for Beginners. We covered almost everything from the basics like syntax and data structures to more advanced topics like regex, regular expressions, and lambdas. The guide also covered important topics like version control and building Python apps to put your skills to good use. The best way to learn a new programming language is to practice as often as possible. This guide will help you learn the basics of Python, but it’s important to actually code as often as you can.