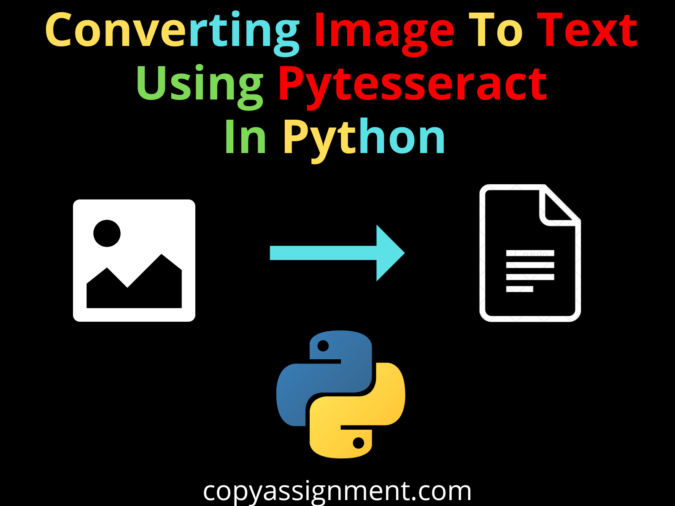 As a developer, you may need to Extract Text From Images. We can write a Python program to extract such textual information from each and every image. In Python, we can use the Pytesseract package for this OCR(Optical Character Recognition) process.

To get started with the Python script, we need to install a few required libraries.

Pillow library acts as an image interpreter with all image processing capabilities.

To install the pillow, run the following command:

We will use OpenCV to recognize texts from the media files (images).

Creating a Python tesseract script to Read Text From Images

We’re almost ready to read text from images. Before that, though, you need to import the Pytesseract, Pillow, OpenCV, and Numpy libraries for extracting text from image python

The following script specifies the path for the Tesseract engine executable file we installed earlier. If you installed Tesseract OCR in a different location, you need to update your path accordingly.

The first step in reading text from an image is to open the image. You can do so by using the open() method of the Pillow library’s Image object. To read the text from an image, first, pass the image object you just opened to the Pytesseract module’s image to string() method. This is a pytesseract image to string article. The image to string() method converts the image text into a Python string, which you can then use however you like. Using the print() method, we’ll simply print the string to our screen. To read the text from the car license plate image, run the script below.

Note: You’ll need to update the path of the image to match the location of the image you want to convert to string.

And to save that text, we create a file called demo. Every word from our image is saved in this file, so we can use it elsewhere in extracting text from image python.

Now, let’s test our code with the image below as input.

The output below shows that the characters from the Passage have been correctly read. However, in addition, ♀ this symbol is also printed in the output.

The output shows that though Tesseract OCR can read text from an image, it is not 100% correct. An accuracy rate of less than 100% is typical with all OCR engines, so don’t let this discourage you.

OCR (Optical Character Recognition) is a technique that recognizes or Extracts Text From Images. It may be used to transform handwritten or printed texts that are difficult to read into machine-readable.

You must install and set up tesseract on your PC before you can use OCR.

Install and Run Tesseract for Windows in 4 Easy Steps

Click the “Next” button on the following dialog box.

Click the “ok” button on the following dialog box.

You’ll be presented with a license agreement, as shown below. Click the “I Agree” button if you agree to the terms.

Step-4. After the operation is completed, use the tesseract -v command to ensure that the OCR is installed

We began by learning how to install tesseract, a text extraction program. Then we grabbed a picture and retrieved the text from it and stored it in a text file. We discovered that in order to extract text from complicated pictures, we must employ OpenCV’s image modification methods. I hope you enjoyed this tutorial and found it helpful.