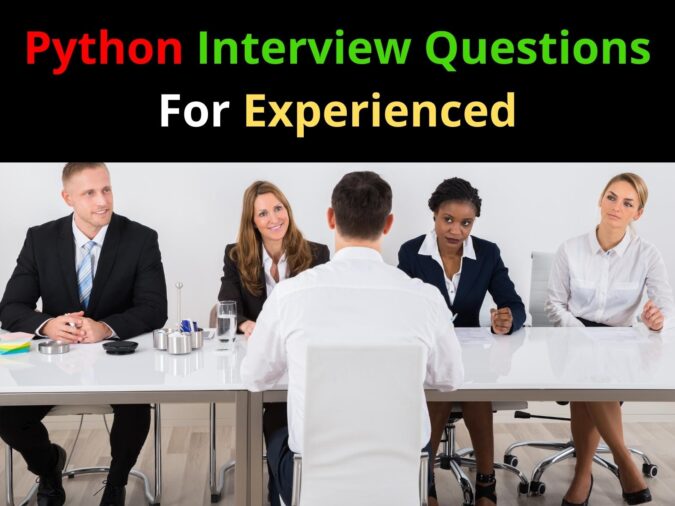 Being an expert in a programming language may guarantee you a good salary and a rewarding job. Among the hundreds of programming languages presently accessible, Python has moved to the top of the list of the most popular. Let’s start at the beginning with some general Python Interview Questions For Experienced. These are the kinds of questions you’ll probably be asked at the start of an interview to see if you truly understand Python. After that, we’ll go on to some technical questions before concluding with some general ideas and advice.

Q.1- What is an Interpreted language?

Q.2- Why is Python better than Java?

Python (when compared with Java) is easier to use and has much better coding speeds. Also, when it comes to data, Java is statically typed, while Python offers dynamic typing. This is considered to be a huge advancement.

PEP stands for Python Enhancement Proposal. A PEP is an official design document that provides information to the Python community or describes a new feature for Python or its processes. PEP 8 is particularly important since it outlines the Python Code style rules.

Pickling happens when a module within Python is accepted and converted into a string module, and then later dumped into the file.
As opposed to that, unpickling is when you retrieve the string module from the file. For such comparison-based Python interview questions, try to keep your explanations as simple as possible. Your potential employers will probably appreciate that you are able to explain tough topics in a simple-to-understand manner.
Click here for more.

Q.5- Is there any difference between ‘Range’ and ‘Xrange’?

Yes, although it might not be noticeable at first. In terms of functionality and the tasks they perform, both commands are nearly identical. The key difference, however, is that range (when used) brings back a list object, while xrange returns an xrange object.

Q.6- What is the Dogpile Effect?

A Dogpile effect happens when a website’s cache expires, yet it is hit by many different requests from the user. This can cause many different problems, from lag spikes to complete crashes. A system called semaphore lock is used to prevent Dogpiles from happening.

Q.7- What are unit tests in Python?

Q.8- What is Encapsulation?

Encapsulation is a process of grouping related data members into one, single place. Along with the members themselves, encapsulation also returns their functions, too.

Q.9- How is memory managed within Python?

Pass simply indicates a space that should be left blank within the compound statement.

Q.11- When does abnormal termination happen?

Abnormal termination is a crash of your program in the middle of its execution, while the main tasks are still running. This is usually caused by faulty code or some software issues. (It is a Bad thing)

Q.12- If you would need to count all of the capital letters in a file, how would you do it?

Q.13- Does Python cave a Compiler?

Python indeed does have its own compiler, but it’s rather easy to miss. This is because it works automatically – you don’t really notice it.

Q.14- What is Monkey Patching?

Monkey patching refers to modifications that you would make to the code when it’s already running.

Q.15- Write a piece of code that could save images locally from the URL.

Decorators are used to insert new and fresh pieces of code into an already existing class or function. With the help of decorators, you can make these codes run before or after the original one.

A module called “re” lets you modify your strings in Python. There are three methods of how you can do this:

sub(): finds specific strings and replaces them.
subn(): same as the sub(), but also return the new strings with the exact number of replacements.
split(): splits a specific string into a list.

Q.18- What do the processes of ‘Compiling’ and ‘Linking’ do?

Compiling lets you compile new extensions within your code without any errors. After that, linking can be a fluid process – a successful compilation smoothens out linking and eliminates any possible issues throughout the process.

Q.19- What are Decorators in Python?

Decorators are functions in Python that add functionality to an existing function without affecting the structure of the function itself. In Python, they are represented by the @decorator name and are invoked from the bottom up.

Q.20- What are Generators in Python?

Generator: A generator function is defined like a normal function, but whenever it needs to generate a value, it does so with the yield keyword rather than return. If the body of a def contains yield, the function automatically becomes a generator function.

Q.21- Which are python tools that help to find bugs or perform the static analysis?

PyChecker: is a static analysis tool that detects the bugs in Python source code and warns about the style and complexity of the bug.
Pylint: is another tool that verifies whether the module meets the coding standard.

Q.22- What is PIP software in the Python world?

PIP stands for Python Installer Package, which provides a seamless interface to install the various Python modules. It is a command-line tool that searches for packages over the Internet and installs them without any user interaction.

Q.23- What is the significance of the ‘self’ parameter in an object method? Should we always name this parameter as ‘self’?

Q.24- Which module(s) of Python can be used to measure the performance of your application code?

In Python “ Time module “ is used to calculate the time at different stages of the application and use the Logging module to log data to a file system in any preferred format.

Q.25- How do you launch sub-processes within the main process of a Python application?

Python has a built-in module called a sub-process. You can import this module and either use run() or Popen() function calls to launch a subprocess and get control of its return code.

Q.26- What should be the output of the following code:

Q.28- What is the use of Assertions in Python?

Q.29- What is the difference between a shallow copy and a deep copy?

Q.30- Differentiate between an expression and a statement.

Expressions contain only identifiers, literals, and operators.
Statements are the smallest executable units of code, such as creating variables or displaying values.

Q.31- What happens if an error occurs that is not handled in the except block?

The program terminates. and an execution trace is sent to sys.stderr.

Q.32- How are Phon blocks defined?

A block is a piece of Python program text that is executed as a unit. The following are blocks: a module, a function body, and a class definition. Each command typed interactively is a block.

One General Tip For All

One smart method to give a positive impression is to not appear as if your life relies on the outcome of the interview – if you’re sitting there sweating heavily and trembling like a leaf while attempting to answer Python technical interview questions, you can terrify the person you’re talking to.

Also, don’t be arrogant – you may have 20 years of professional Python knowledge, but what use would that be if you don’t get the job because you sneered at some of the easier Python coding interview questions and came off as arrogant as a result?

Get a good night’s sleep and don’t stress about it; show your potential employer who you genuinely are, and you’ll be successful.

I hope you linked this article.