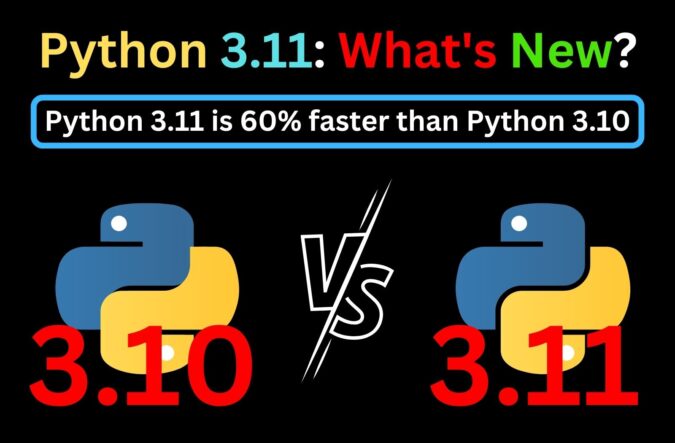 Python is an open-source programming language. What makes Python open-source is that it is constantly been upgraded by the Python community. The community comes up with exciting new upgrades and features in Python every year.

New features and upgrades in Python 3.11

The community has well put in docs that Python 3.11 can be up to 60% faster than Python 3.10. Also, the benchmark suite runs up to 25% faster than in 3.10. This can be profitable to Python programmers and data scientists.
To run this benchmark test to compare the speeds of Python 3.10 and Python 3.11, you will need a docker installation on the system.

Python 3.11 offers a new function called add_notes() to make the exceptions as expressive as possible. Any custom messages can be passed so that they will be displayed if any error will be raised.

Look at this code snippet:

On running, you can see your custom note has been displayed on the terminal

This feature is pretty useful in dealing with errors.

Talking about the error part, the next major upgrade Python 3.11 came with is explained in the next part.

Python 3.11 has a new upgrade with the display of error messages. Previously, the interpreter would throw an error mentioning the line number and error description, but with this version, the ~ and ^ characters are added to specify where the error actually might be.

The characters ~ and ^ stating the actual part of the error.

Most of the common and stand libraries of Python gone improved with Python 3.11.

In previous versions of Python, the function returning self-objects was a lot more confusing and almost impossible. But typing library in Python 3.11 includes a self that lets you return the instances of a class.

All the fields in the typedict used to be compulsory. But Python 3.11 introduces Required and NotRequired, which can mark if the item is mandatory or not.

The title is a required parameter whereas the year is not.
Considering the examples,

object m1 and m2 will work fine but object m3 will throw an error.

These were some major upgrades in Python 3.11.

It is recommended to update Python with the latest version because 3.11 is faster, more expressive, and has static typing support, and TOML support.

Installation of Python 3.11:
Python 3.11 is available to install on the official websites.
Check it out here.